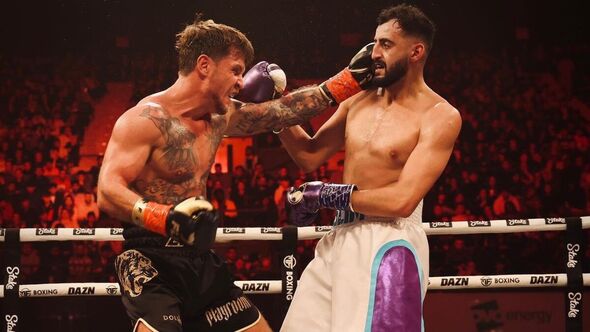 Both men came out looking to land with bad intentions from the off. Zanetti drew first blood with a stinging right hand but instantly ate a powerful one of his own as he stumbled into the ropes. A confident Zanetti clowned his adversary in the opener but quickly realised he was in for a fight.

In the second round, Slim began to settle down and pick his shots while Zanetti continued to throw hell to the wind. To his credit, the musician showed a lot of heart and an excellent chin as Slim began to land at will.

Coming into the third, Zanetti took a deep breath and got back to it as he attempted to smother Slim’s work. Pouring forward, Zanetti crunched home a huge left hook followed by a straight right that rocked Slim to his boots.

The strength and power of Zanetti appeared to be getting the better of Slim’s skill and experience with the YouTube star being drawn into Zanetti’s game. In the final round, it came down to who wanted it the most and according to the judges it was Slim.

After improving to 6-0, Slim – a natural super-middleweight – admitted that he wants to move back down to 168lb after this fight unless he is given the winner of KSI vs FaZe Temperrr.