This is a great place to watch boxing.

I had the privilege of covering Tim Tszyu’s American debut at The Armory in Minneapolis, which is where Prince’s “1999” was shot. It was a terrific venue, but the atmosphere here is every bit as good.

We’ve got about 6000 Novacastrians crammed in here and to say they are boisterous is an understatement.
Now Nikita will become the third member of his family to experience it first hand.

Gallen: What are these punches doing to my brain?

Speaking of Paul Gallen’s future, you should read Adrian’s story about the former NRL and State of Origin legend’s concerns about the impact of boxing on his brain, which could dictate how much longer he goes on for.

“I don’t want to get five years down the track and all of a sudden I’m ‘dudududududududu’, stuttering and umming and ahhing,” Gallen said.

“I still want everything intact, to be able to talk clearly and know what I’m talking about basically.”

G’day from the SMH’s Leichhardt bureau

Hello everyone – a quick welcome from me too. I’ll be steering the blog tonight from the couch and taking you through the main fights while Adrian regularly chimes in with his observations from the venue and to give you a little taste of the build-up. This should be a fair bit of fun.

Is it really the end for Gallen?

It’s not the first time we’ve heard Paul Gallen say he’s close to hanging up the gloves. However, as he approaches his 41st birthday, he admits it’s getting tougher to keep punching.

When I spoke to him in the lead up, he said he recently went to a BBQ with mates and had a couple of beers, the first time he has been able to do that since becoming a professional athlete. And he liked how it felt.

It’s possible he will box again this year, but he’s resigned to the anticipated megafight with Sonny Bill Williams not materialising.

“At the end of the day, the fight’s not going to happen,” he said.

“I’ve mentally switched off from it. As you know, I can’t do anything else to try to make it happen.“

With the exception of perhaps Anthony Mundine, no Australian sporting star has made more money out of playing the villain.

We’re going to miss him when he’s gone.

The other Tszyu is in the house

Tim Tszyu will fly out for California tomorrow morning to be a ringside guest at this weekend’s Brian Castano-Jermell Charlo rematch. The winner will hold all the major super-welterweight belts and Tszyu is in prime position to challenge for them.

I caught up with Tszyu in Newcastle, where he has stopped in to support his brother.

The “Soultaker” was in good form, vowing to knock out whoever wins the title fight.

“I can’t wait,” he said. “I will look straight into their eyes and tell them ‘You’re next.’

Tim Tszyu underwent operations on both hands to correct tendons that had torn from the knuckle, an injury he sustained early in his American debut against Terrell Gausha in Minneapolis.

However, he’s adamant he’ll be ready to rumble against the winner of Castano-Charlo.

Hello and welcome from ringside

It’s a venue better known as ‘Tszyu-castle’, an apt name given Nikita Tszyu – son of Kostya, brother of Tim – is one of the headline acts. He will be making just his second professional appearance on one of the most stacked domestic boxing cards in history.

The main event again features Paul Gallen, in what could be his last fight ever, contest for the Australian and Australasian heavyweight titles against Kris Terzievski. If this is indeed the end, what a way to finish if he can add the belt to all of his footballing accomplishments. 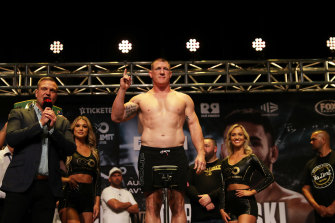 Tszyu will also have his hands full, against the unbeaten Mason Smith. It still too early to know just how good the youngest Tszyu is, but we’ll get a fair indication after this one.

We’ll also witness Harry Garside back in action. Garside is the first Australian Olympic medallist since Grahame “Spike” Cheney way back in the 1988 Games. With the great Johnny Lewis in his corner, he has shown plenty of promise in his opening professional bouts and will need to go to another level against Tasmania Layton McFerran.

There are plenty of other great match-ups on, so settle in and enjoy the action!