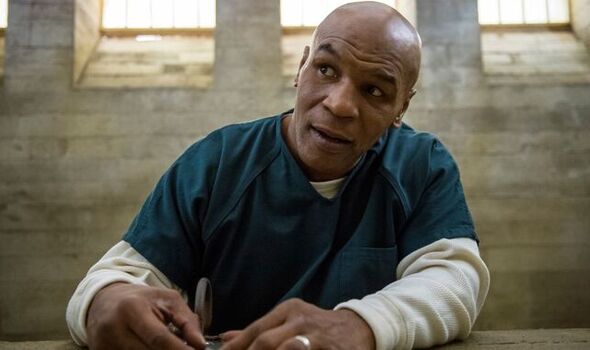 Mike Tyson has admitted he got a prison school teacher pregnant after the pair had sex multiple times behind bars.

Tyson was incarcerated for three in 1992 after being convicted on a charge of rape and sentenced to six years in prison. The former baddest man on the planet was only 24-years-old at the time and was coming off a win against Donovan Ruddock in their rematch before being locked up.

In a recent episode of Revolt’s DrinkChamps, Tyson revealed that the teacher was helping him study for a General Educational Development (GED) diploma when they first had their steamy encounter.

Mike Tyson challenger vows to ‘rip his heart out’

Joshua branded ‘quite rebellious’ by Hearn ahead of Usyk rematch

In another recent interview with Vlad TV, Tyson revealed he had slept with his prison counsellor as well. ‘Iron Mike’ even began dating his counsel worker despite having to make up another year of his sentence due to repeated write-ups for poor behaviour.

He said: “I got in trouble like the first six months and stuff, cursing, getting written up,” Tyson previously told Vlad TV. “And then by that time, I got the hang of the place. ‘Hey, I know how to do this.’

“Next thing you know, I’m dating one of the counsel workers now, she’s letting me have sex with her now. So, I’m going good. But the first six months I was getting write-ups, I have to pay that year back. [Now] I’m like a star pupil prisoner. Trusty, everything. Then, ‘Hey Mike, remember the first six months you were a prick?’ Boom. They gave me another year.

“So, by passing the GED they took that year away. So, I flunked the f***ing GED and got mad… So, I had to start dating this counsellor and stuff, giving her money and doing really some nasty stuff to her, and she let me pass this test. “It was just meant to be. I was Mike Tyson, and everybody gave me what I wanted. Everyone talking like I was some tough guy or some cool guy. I was just a pig.”

After being released from prison, Tyson returned to the ring in August 1995 to face Peter McNeeley in one of the strangest fights of Tyson’s career. Despite talking a good game in the build-up McNeeley was floored within a matter of seconds before tasting the canvas again one minute later. Then, in a bizarre set of circumstances, McNeeley’s manager entered the ring resulting in a disqualification for ‘Hurricane’.

Tyson would go on to recapture the WBC heavyweight title against Frank Bruno two fights later, but many were left with the question of ‘what could have been if he hadn’t gone to prison during his prime?’