A super-fight between Alexander Volkanovski and Islam Makhachev will be one for the ages… Conor McGregor told the Aussie to ‘go back to his rugby days and be a bowling ball’ – so could he make history against the UFC’s newest superstar?

The pound-for-pound No 1 on home turf vs a Dagestani destroyer who looks every inch the UFC’s newest superstar? Dana White can already see the dollar signs rolling.

When a fighter steps into the octagon to cut a promo, you know the next showdown is as good as signed and sealed.

Alexander Volkanovski, or ‘that short guy’ as Islam Makhachev calls him, shook hands with the new lightweight champion on Saturday night at UFC 280, all but confirming the plan to shoot his shot by stepping up a division. 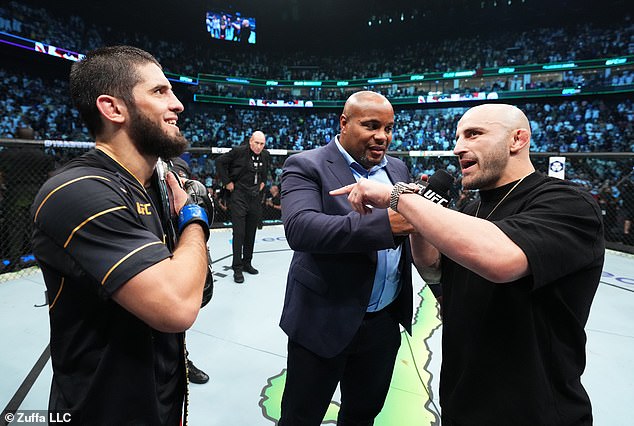 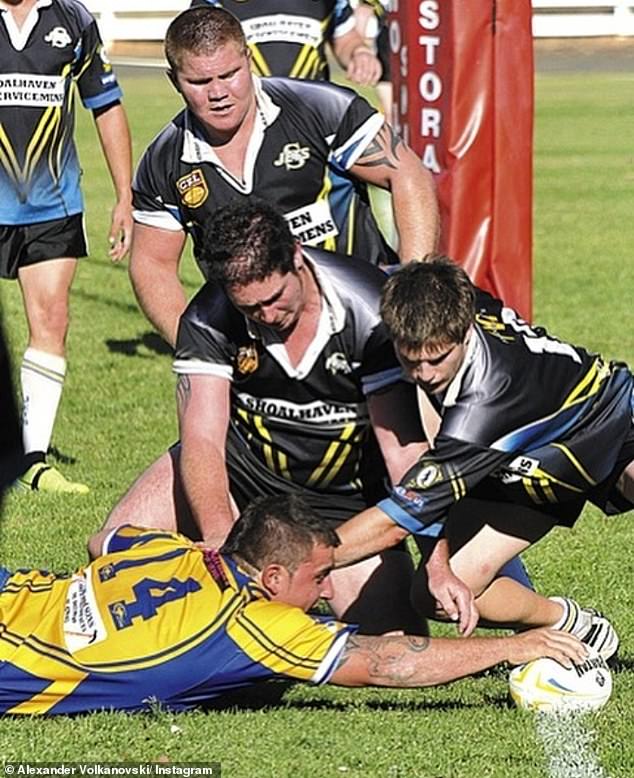 While a gaggle of frustrated lightweights will have to wait their turn, there’s no doubt that Volkanovski deserves to leap the queue.

He’s battered the featherweights into submission but is now in the unusual position of preparing for a super-fight in which he’s the 3/1 underdog.

Such was Makhachev’s dominance in Abu Dhabi in his second-round submission win of Charles Oliveira, that the main post-fight comment from fans seemed to be: ‘Who can beat this guy?’

Makhachev wrestles with as much relentless power as Khabib but is a far more polished striker and hardly ever has any mental lapses.

The task for the Sydney native is an intimidating one. But he is the pound-for-pound No 1 for a reason and may well enjoy the pressure valve being released.

The Irishman believes Volkanovski’s best chance would be to bulk up – as he did when he was a barreling prop in rugby league before converting to MMA.

He tweeted: ‘And we dance on. Good. I was in your exact spot one time don’t forget. 145 coming up. Good luck.

‘I’d say go heavier. Rugby days. Be a bowling ball. That’s how I’d do it as you. Your condition right now as I see it, I don’t know. But bowling ball style for you for best chance.’

On paper, ‘that short’ guy is being written off for a couple of reasons. Makhachev’s brilliance is one but the size and shape disadvantage is another.

Let’s examine that for a moment. Volkanovski is 5ft 5in but the Russian only stands three inches higher at 5ft 8in –  hardly a monumental difference – and the Aussie has fought far taller men.

The other factor is reach. Volkanovski actually has a one-inch advantage in this department at 71in – so he’s hardly going to be dwarfed by the bigger man. 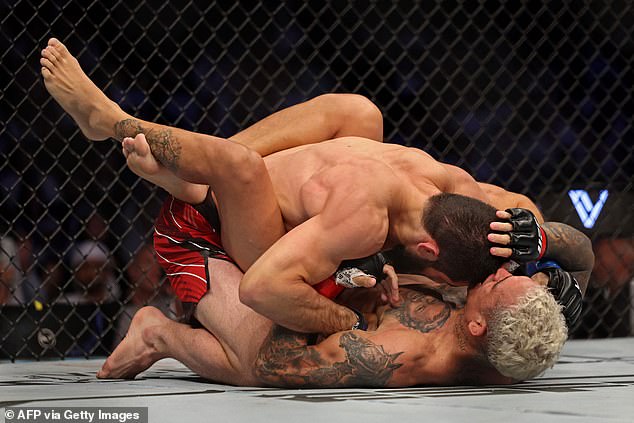 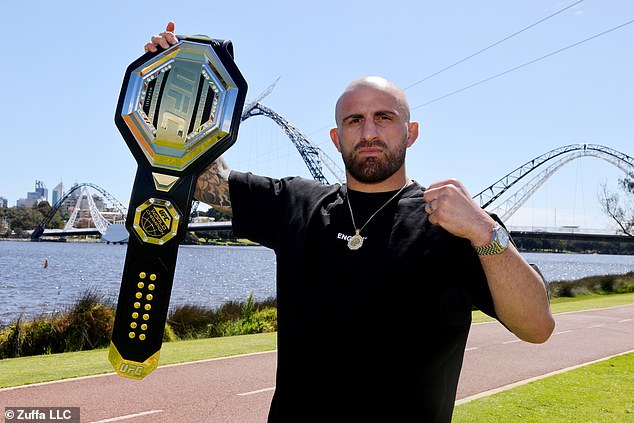 Volkanovski would have a vociferous home crowd behind him in Australia

And while Volkanovski typically lacks one-punch KO power, he is explosive enough to cause Makhachev issues.

Perhaps the shorter stature will even help in certain scenarios, a point he made at the weekend.

‘Getting me down is going to be a problem and if you do, I’m bouncing right back up,’ he insisted.

‘People are gonna say size this, size that but trust me, anyone that trains with me knows that strength is never a problem for me.

‘Everyone thinks I’m short and then I’m punching them in the face and their face changes real quick when I’m in front of them.

‘It’s definitely a challenge, I’m not going to sit here and say it’s not a challenge but is it a challenge I can overcome and get through? 100 per cent, I guarantee you I can.’ 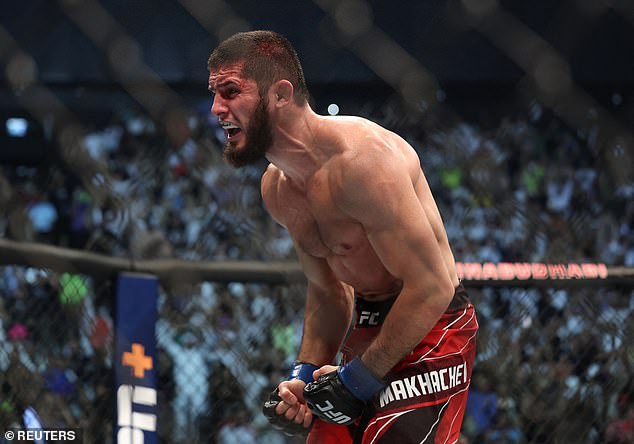 Makhachev (pictured) matches up well against everyone with his dominant wrestling

And even reflecting on Makhachev’s win over Oliveira emboldened the 34-year-old. ‘I thought Islam would be able to control him a little bit more, I thought he’d be a lot stronger than Charles,’ he added.

‘Charles was still able to get up and throw submissions and he wasn’t able to control him as well as I thought he could and that just makes me more confident because I’m very, very hard, not only to take down, but to hold down.’

Home advantage could be another key element to any super-fight. Khabib made a point of asking for it to be in Volkanovski’s territory.

He said: ‘Now is our plan, fly all the way to Australia and fight in the pound-for-pound king’s back yard.’

Makhachev is adored in Abu Dhabi and worshipped with the same level of fervour as Khabib in that neck of the woods.

He’d be the pantomime villain in Australia and there’s no doubt Volkanovski’s performance levels will be lifted a few percentage points by a home crowd. 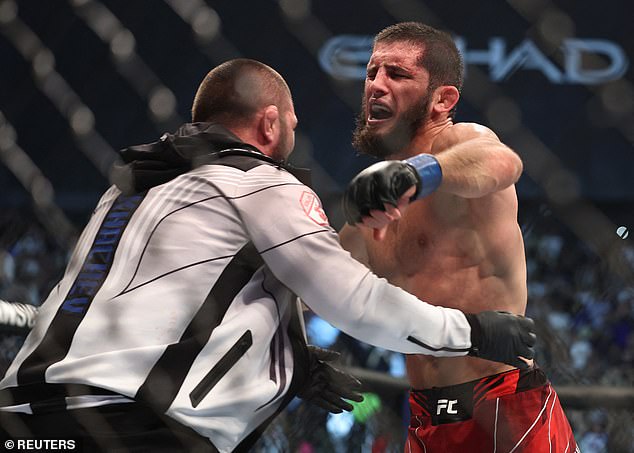 Under the coaching and mentorship of Khabib Nurmagomedov, Makhachev’s route is plotted

A win over Makhachev would be one of the great victories in UFC history and cross-division super-fights only come around once in a blue moon.

McGregor cracked lightweight after featherweight by demolishing Eddie Alvarez and Daniel Cormier jumped up to heavyweight in beating Stipe Miocic.

But it does not always go to plan for the history chasers. Israel Adesanya was the last man to step up for a cross-division super-fight.

Back in March last year, he was a strong favourite to dethrone Jan Blachowicz and grab the light-heavyweight belt to go with his middleweight title.

But he was out-muscled in the end and unable to make his striking prowess tell in the division above.

Whether Volkanovski can go one better remains to be seen. But the man from New South Wales will have the chance to double his gold and prove himself once more as the undisputed pound-for-pound No 1. 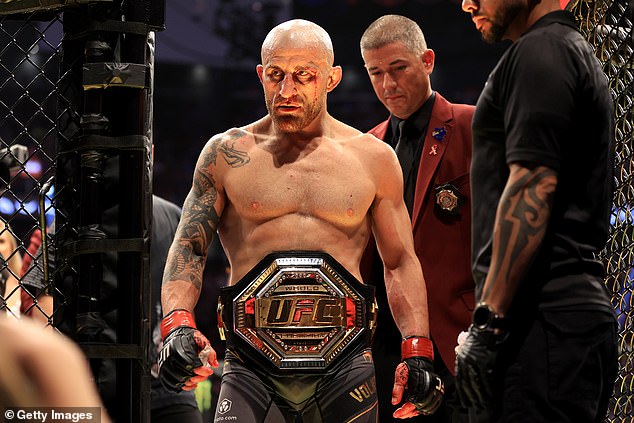