Kostya Tszyu has revealed plans for son Tim to fight in Russia next year, declaring the event will be “something special that the family will never forget”.

Tim Tszyu will take on the WBO’s seventh-ranked boxer, Japan’s Takeshi Inoue, at Qudos Bank Arena on Wednesday night. Should Tszyu extend his undefeated record to 20 consecutive wins, he is mandated to fight Brian Castano for the Argentine’s WBO world title.

Should Tszyu junior secure the championship belt, his legendary father wants his first defence to be held in Russia. In a rare interview, Kostya Tszyu spoke about the pride he would feel in witnessing Tim fight in his homeland, something he never achieved during his own illustrious career.

“This is going to happen,” Kostya Tszyu told The Sun-Herald from Russia. “We have talked about this for a long time. It’s going to be something special that the family will never forget. It will be a dream come true.

“It’s going to get big attention here and [in Australia]. He has to beat Castano and then he can come over here.

“It’s time to open up [borders after the pandemic]. We could do it in spring time here. It would be a very big thing to do this.” 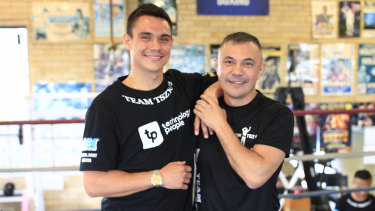 Tim and Kostya Tszyu in 2019.Credit:Getty

“We could do a co-promotion,” Kostya said. “There is no reason why we can’t do this. It would mean a lot to me and to a lot of people. Tim lives in Australia but this is something he wants to do. We have been talking about doing this; it would be good to finally do it.”

“It’s hard to believe it has been 20 years,” he said. “That was a very special moment.”

“It would be a very big thing to do this.”

When Tim began his professional career, he had to endure the inevitable comparisons with his famous father. Tszyu jnr has stated that he wants to make his mark in the sport, to the point where the narrative flips and he is no longer considered “Kostya’s son”, rather that the elder Tszyu becomes known as “Tim’s dad”.

“That will make me very happy; that’s what I want, too,” Kostya said.

“People should stop comparing us. Tim is his own man. This is his journey, he has done it himself.

“I am very proud of him. Not just because of boxing, but because of the man he has become. He is doing it his own way, but I am always in his corner. I am always going to be here for him.”

Kostya believes Tim has what it takes to defeat Inoue and then take the world title from Castano.

“He can do it,” Kostya said. “This is a very dangerous fight [against Inoue]. But when someone calls you out you take on the challenge. People say he shouldn’t take it, but if you want to be world champion you have to beat everybody. That’s what he needs to do.”

Tim and Kostya haven’t seen each other since September 2019, when the latter last visited Australia. Just like his father did during his storied career, Tim has made the Tszyu Boxing Academy in Rockdale his second home.

Asked how far Tim can go in the sport, Kostya said: “It’s up to him. If you work hard, everything can happen. He understands what it takes to do this. He understands the sacrifice, he has seen it. He knows all the pain, all the blood and blisters.

“He is now 27. When I was 25 I was already world champion. There are big challenges, but he can do it. He will do it his own way.

Tim Tszyu has previously spoken about his desire to become an international star.

“I would love to fight in Russia. That has been my dream. And America,” Tim said in 2019. “Sydney is my home and I think everyone in Sydney is behind me.

“I want to represent Australia and Russia on a global scale. That’s only [done by winning] world titles.”