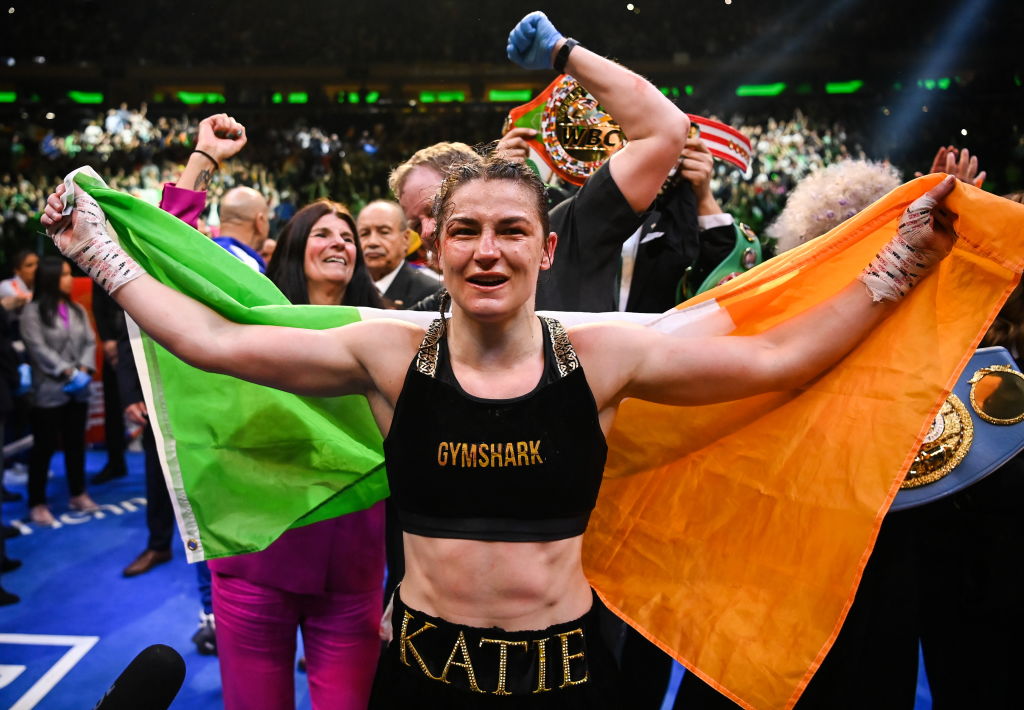 Katie Taylor has cemented her status as the best fighter in women’s boxing with victory over Amanda Serrano in a fight for the ages in New York.

In a game-changing fight between the no1 and no2 pound-for-pound best in the sport at a sold-out Madison Square Garden, Taylor secured a split decision victory to retain her WBO, WBA, WBC and IBF lightweight titles.

The Irish icon recovered from a torrid fifth round to take back control of an enthralling battle, digging deep to secure the biggest victory of a remarkable career.

Taylor extends her flawless professional record to 21-0 having seen off all challengers, making the sixth successful defence of her undisputed title against her most formidable opponent to date.

Serrano has won world titles across seven different weight divisions, a tally only bettered by the legendary Manny Pacquiao.

The tenacious and hard-hitting Puerto Rican, raised a stone’s throw away from MSG in Brooklyn, had been backed to end Taylor’s reign at the top with the champion’s recent performances deemed to have lost some of their sparkle.

But ‘The Bray Bomber’ produced another stunning performance at 35 in one of the most important fights in the history of the sport.

Taylor landed the crisper shots in the opening rounds before the contest exploded into life in an incredible fifth. Serrano swarmed over Taylor, dazing the champion with a vicious flurry of shots upstairs and to the body, landing 44 punches in all with Taylor seemingly out on her feet.

Taylor returned for the sixth looking to exchange but again left herself vulnerable with Serrano making her miss and making her pay, taking the lead on the scorecards.

Paying the price for standing and trading in the mid-rounds, Taylor entered the eighth round needing to drastically shift momentum. A superb counter left slowed Serrano down as the champion fought her way back into the contest as she discovered her rhythm and began to outwork the challenger once again.

Serrano had noticeably taken her foot off the gas as the fight entered the ninth with Taylor finding her target again with crisp combinations.

Serrano found urgency in a breathless final round as both woman stood toe-to-toe, exchanging heavy blows right up until the final bell in a glorious finale.

After a tense wait for the scores and an emotional embrace between the two history-makers in the ring, Taylor was declared the winner by the smallest of margins.

Taylor’s promoter Eddie Hearn teased the possibility of a rematch during fight week with both fighters jumping at the chance to run it back in their post-fight interviews.

Hearn has suggested a second fight could take place back in Ireland, where Taylor has not fought since turning professional.