Justis Huni retained his Australian heavyweight title in spectacular fashion after becoming the first man to knock out Paul Gallen in a perfect tune-up for the Tokyo Olympics.

Huni dominated the anticipated encounter at the International Convention Centre on Wednesday night, winning every round before landing the final blow in the 10th and final round. The Queenslander ended proceedings with a stunning series of blows, the referee mercifully ending the contest before its scheduled conclusion. 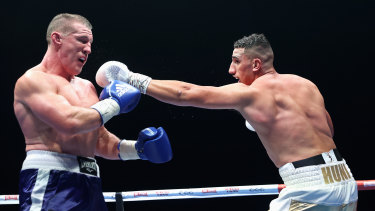 Justis Huni was too good for Paul Gallen.Credit:Getty

“I’m not against it,” Gallen said. “That was a good challenge for myself … I’ll weigh it up in the future with what’s going to happen.”

This was proof that Huni is the real deal. The Queenslander has been touted as perhaps Australia’s best-ever heavyweight prospect and is living up to that hype. He handled the occasion, as well as everything Gallen threw at him before and during the contest.

Gallen played 349 NRL games for Cronulla, 32 Tests for Australia, 24 State of Origins for NSW, and boxed in 12 professional bouts prior to this one. Rarely has an opponent got the better of him and never has he been knocked out. 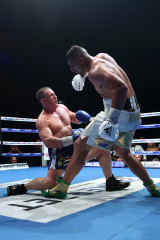 Finally, he has bitten off more than he can chew.

“He knocked me down fair and square, I thought maybe the referee stopped it early but I was never going to win the fight,” Gallen said.

“I think he broke my rib in about the second round … Every time I moved it was clicking. He’s just too fast and he probably punched a little bit harder than I thought he was going to punch. It hurt.

“I wish Justis the best at the Olympics and I hope he can win a gold medal for Australia – maybe we can do it again in a couple of months.”

Huni refused to gloat, thanking Gallen for the opportunity.

“A quick shout-out to Gal, he’s an awesome competitor – very tough, very strong. Thank you to him for putting up an awesome challenge,” Huni said.

“The build-up was good, I enjoyed every step of it. He definitely made it tricky for me with his words but we don’t let that get to us. We come here and do what we need to do.”

Gallen was a despised outsider in his last two bouts, stunning victories against Mark Hunt and Lucas Browne. Against Hunt, the ‘G-Train’ displayed an incredible ability to absorb punishment; against Browne, the ability to dish it out. Both men were well past their prime. This time he ran into an opponent truly on the rise.

Huni, 22, is progressing into the professional ranks after a stellar amateur career. He was younger, bigger and showed the benefit of being immersed in the business all of his life.

It was evident from the early rounds who the winner would be. The question was whether Huni had the punching power to end it early. He proved he does.

“After I accomplish all my amateur dreams and represent Australia at the Olympics, I’ll come back and sit down with my team and definitely change my style into a professional style,” he said.

“Hopefully [I’ll] make you all proud and bring home the gold medal.”