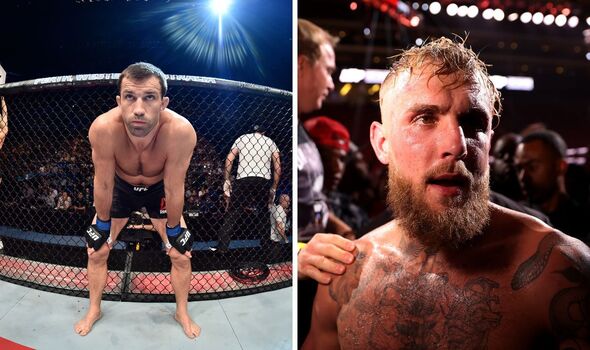 Former UFC middleweight champion Luke Rockhold has told Jake Paul that he’d ‘beat the s***’ out of him if they were ever meet in a fight after Paul’s transition to mixed martial arts. Earlier this month, Paul announced that he had signed a deal with the Professional Fighters League (PFL) and will fight in the sport in 2023. Paul will own equity within the company whilst having a role as head of fighter advocacy to help grow the organisation and take care of its fighters.

He even went as far as calling out legendary UFC fighter Nate Diaz, who is now a free agent after seeing his contract expire with the company and could agree to fight Paul on PFL. Paul is also concentraing primarily on boxing, looking to face Tommy Fury in the coming months, but wants to face Diaz in the octagon as well as a boxing ring – something the veteran has yet to agree on.

But should he not face Diaz, Rockhold has seemingly thrown his name into the equation, with the former champion criticising Paul of facing older fighters (Anderson Silva and Tyron Woodley both being in their 40’s) and smaller opponents (Nate Robinson).

Rockhold told TMZ Sports: “Stop trying to fight little dudes. F***ing [155] pounders. You’re a middleweight. If you want to fight a middleweight, I got hands. We can do anything we want. I really don’t care. I’d beat that guy in my sleep. I got some freedom to do some things and as you can see, I like throwing hands these days. “

“Fight people your own f***ing weight. Straight up. And champions, a real champion, a real contender. A real someone who can put you on your ass. not old guys, 55-year-olds, or lightweights. You can’t even get above a welterweight, dog, So, step up.”

It remains to be seen if Paul will truly fight in the octagon, having no experience in the sport throughout his life after concentraing on boxing for the last four years.

But the YouTuber did wrestle during his younger days in Ohio, alongside his brother Logan Paul, and were accomplished high school athletes.

Rockhold and Paul have previously spoken on each other before, with the 25-year-old calling the formers loss to Paulo Costa ‘an embarrassment to the sport’.

Rockhold retired after that loss, following a highly successful career in the UFC in which he held the middleweight belt before losing it to Michael Bisping.