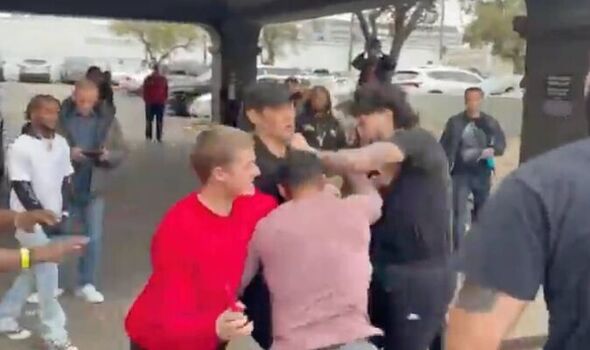 Dillon Danis was involved in a street brawl after punching KSI on stage, with MMA fighter Anthony Taylor taking issue with the BJJ black belt’s actions. Danis is expected to be confirmed as KSI’s next opponent ahead of his return to the ring early next year.

The pair met for the first time on Friday at the weigh-in for a fight card under KSI’s ‘Misfits Boxing’ banner. Unfortunately, the event turned into a circus with Danis landing a punch clean on the YouTuber’s chin.

Danis was pulled away by security as water was thrown and the pair attempted to get at each other. The Bellator fighter, who hasn’t been in the octagon since 2019, was thrown out of the arena.

However, the drama didn’t end there, with Taylor seemingly offended by Danis’ actions. Taylor, who turned to boxing after a MMA career, chased Danis out of the arena before squaring up to him.

In footage recorded from Saturday’s headliner, Hasim Rahman Jr, Taylor can be seen chasing Danis and trying to get at him.

Eventually, he managed to land a punch through a row of security, landing clean on Danis’ jaw. Danis, who was expected to fight Logan Paul before the WWE star’s injury pulled him out of the bout, was sent stumbling backwards by the punch, but insisted afterwards that he was fine.

Speaking to iFL TV, Danis downplayed the incident, before trying to suggest he didn’t know who Taylor was. He said: “I didn’t know who that is, to be honest. I thought he was a homeless guy in the street.”

It isn’t the first fistfight Danis has been involved in this week. He was filmed on Tuesday exchanging verbals with former UFC fighter Nate Diaz, who proceeded to open-hand slap one of his team-mates.