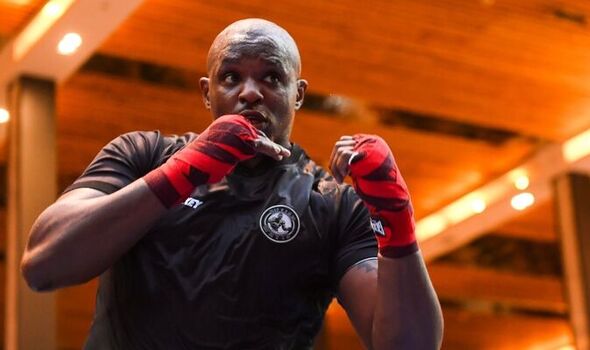 A ‘late flight’ prevented Dillian Whyte from attending the open workout as the mind games continue into fight week ahead of Saturday’s mammoth WBC and Ring Magazine heavyweight world title clash with Tyson Fury at Wembley Stadium. A record-breaking 94,000 spectators will be in attendance in north London but arguably the biggest heavyweight fight in British history has been partially robbed of the salivating, foul-mouthed build-up that many were anticipating.

Whyte opted to swerve the initial fight press conference in early March, remaining in Portugal where he continued preparations for the biggest fight of his life.

The 34-year-old’s legal team were also locked in a dispute with Queensbury Promotions, who allegedly offered to bring him back over to the UK on a Ryan Air flight.

Now Whyte has decided to comply with clause 11 of the fight contract, that states he is legally obliged to actively promote the bout on his social media accounts, something he did for the first time last week.

He also participated in a virtual press conference last week before conducting a further interview with BT Sport in Vilamoura.

However, Whyte and his team were not present on Tuesday afternoon at BOXPARK, Wembley for the first of several fight-week commitments.

Sources have relayed that Whyte cited a ‘late flight’ as the reason behind his absence.

Express Sport understands Whyte is now back on UK soil as he looks to pull off a significant upset against the unbeaten Gypsy King.