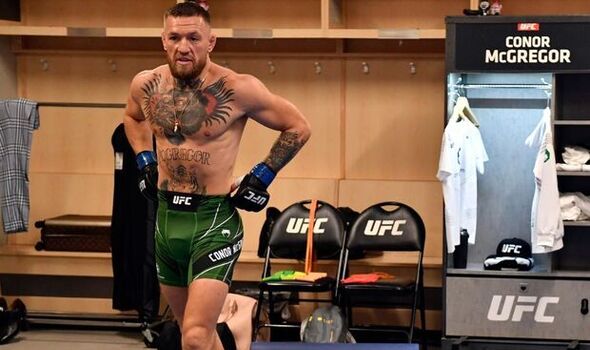 Conor McGregor has given another indication that his return to the UFC might be sooner rather than later in sending a strange message to his fans. McGregor is looking different nowadays after shaving off his beard, with many fans sending him messages on his new-look. In reaction, the Irishman has posted a number of photo’s hiding his face. And in a recent message, McGregor chose to use a filter which changes his face to that of an Ape.

In a strange voice, sounding a little like a Batman villain, whilst having the filter on, McGregor says: “I told you I’ll be back. Wakey, wakey.” It’s not the first time that McGregor has tried out a different accent, showing off his acting after he filmed a Hollywood remake of ‘Road House’ alongside Jake Gyllenhaal this summer.

The Irishman continues to look much heavier than he ever has, and is expected to fight at welterweight when he returns to the UFC after being away from the octagon for over a year, after suffering a serious injury in a loss to Dustin Poirier.

McGregor lost twice to Poirier, the second coming after McGregor broke his leg as he declared ‘this isn’t over’ – wanting a fourth fight with his rival which has been rumoured to be a possibility.

But McGregor is set to move up from 155lbs to 170lbs – with the likes of Leon Edwards, Kamaru Usman, Colby Covington and Khamzat Chimeav in his class.

It is not known when exactly McGregor will return, but rumours have emerged that it will be in the first quarter of 2023. Some had even doubted if he’ll return at all, choosing to continue his acting career.

McGregor has been as active as he ever has in recent periods since finishing filming ‘Road House’ in preparation for his UFC return, including calling out Michael Bisping, Carl Froch, Alexander Volkanovski and Hasbulla.

Should he fight at welterweight, he would not be given a title shot any time soon, with Usman and Edwards set for their rematch in the first quarter of the year, which Dana White has insisted will be in London ‘one of the biggest cards ever’. White also stated he’d like to put Khamzat Chimeav on that card.