Chris Eubank tears up as he discusses late son Sebastian

Chris Eubank Jr has revealed drug testers turned up to his home unannounced ahead of his upcoming bout with rival Conor Benn. Eubank and Benn are reigniting a rivalry first born from their fathers Chris Snr and Nigel, as the pair take each other on in London this October.

With six weeks to go though, Eubank has revealed he has had drug testers arrive on his doorstep without pre-warning in the build-up to the eagerly anticipated fight. The 32-year-old shared the random testing drop in on social media after uploading a photo of the test on Twitter.

Along with the snap, boasting about his 100% clean record he wrote: “Random unannounced home drug testing. 10 years in the game NEVER failed a test. Not everybody can say it but WE FIGHT CLEAN around here!!”

The clash between the two British fighters will take 30 years after their fathers fought it out in the ring in their second bout. Three decades on from Eubank and Benn Snr’s clash, the former’s son Chris Jr has revealed his dad will be in his corner on fight night at the O2 Arena, London.

JUST IN: Tyson Fury ‘to unretire’ to set up Oleksandr Usyk thriller despite £500m demands 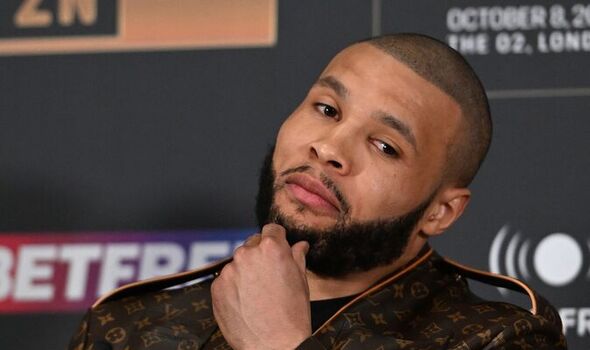 Again taking to Twitter, the 32-year-old wrote: “My old man will be in my corner once again on Oct 8 when I face off against Benn.” As ever, Eubank Jr has displayed plenty of confidence in the fight build-up and most recently confirmed he is ready to ‘school’ his opponent when they meet in the ring on October 8.

Speaking to iFL TV, he said: “I don’t have a specific game plan or a specific vision for how the fight is going to work. I just know that as soon as that bell goes, I’m going to be completely comfortable in whatever situation he tries to put me in.