After years of waiting, have the stars FINALLY aligned for Tyson Fury vs Anthony Joshua? The Gypsy King needs a dance partner soon, while AJ MUST box again this year to honour his DAZN deal… an all-British blockbuster could make sense at long last

Sometimes good things happen when you least expect it. That would certainly be the case if Tyson Fury and Anthony Joshua, Britain’s two dominant heavyweight forces of the past decade, finally collided later this year just when all hope appeared lost.

Joshua’s second straight defeat against Oleksandr Usyk last month looked to have floored a mega-fight with Fury to the point of no return. A more pressing question was whether he would even choose to box again, or which path he would take to slowly rebuild his stock. The domestic blockbuster long craved by UK fans, meanwhile, was dead in the water.

For Fury, battling Usyk to crown a first undisputed heavyweight champion since 2000 was the next logical step to take. The Ukrainian, who in outclassing AJ not once but twice has flexed his muscles as one of the division’s top dogs, still holds three of the four recognised world titles, and by unifying them with his WBC strap Fury would be able to etch his name into the history books once again before riding off into the sunset. 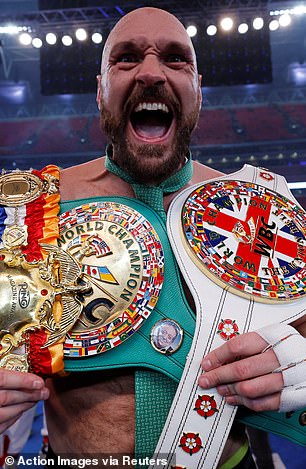 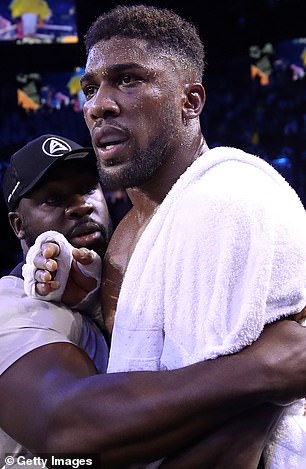 Though while Fury vs Usyk is an obvious bout to run next, early talks have already hit a snag over several issues. Firstly, Fury is demanding an unfeasible £500m to come out of so-called ‘retirement’ and make it happen. That asking price is perhaps just bravado from the Gypsy King, who will be well aware that collecting such a figure is virtually impossible, yet a greater stumbling block thwarting an imminent undisputed contest is Usyk’s reluctance to stage it in December.

Fury has set his sights on returning then, eight months after he last ran out to face Dillian Whyte at Wembley Stadium. However, having prepared for his recent title defence amid the backdrop of Ukraine’s war with Russia, and service on his country’s frontline, Usyk has no intention of lacing up the gloves again in December.

‘Fighting Tyson Fury in December is impossible,’ he said in Kyiv on Friday. ‘For two reasons. First, I have old injuries that need to be treated. They made themselves known. Recovery will take a couple of months. 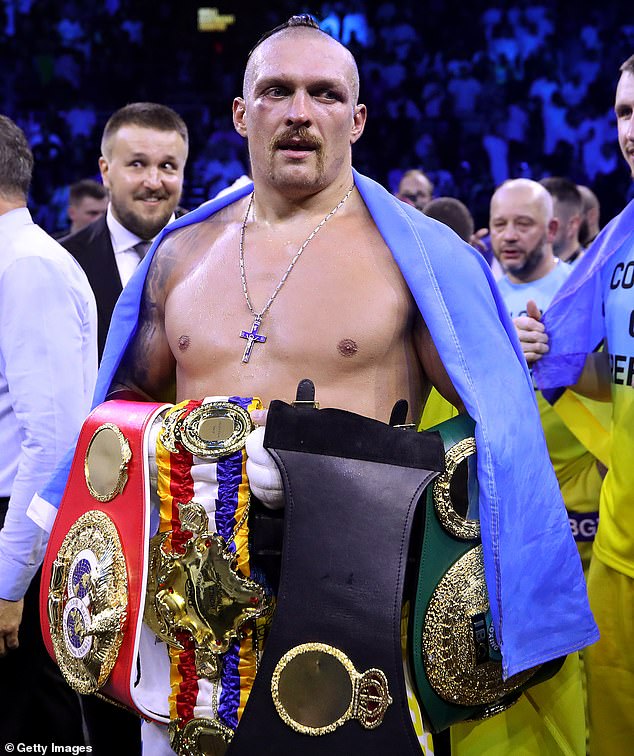 Fury looked likely to return for an undisputed bout against Oleksandr Usyk next, but the Ukrainian has no intention of fighting in December 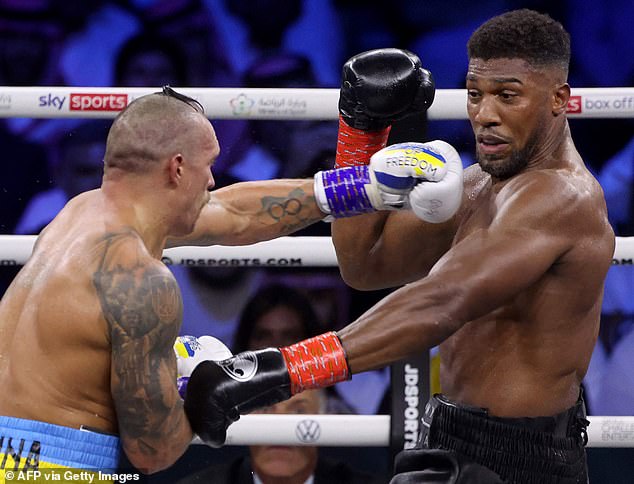 ‘Second, I just don’t want to box in December. I haven’t left the gym for half a year, I want to be with my children, my family, there are certain things to do at home. Boxing can wait a little. Next year, I think it will happen.’

So while waiting for Usyk to recharge his batteries, what move does Fury make in December? On Monday night his preference became clear.

In a surprise video message on Twitter, he threw down the gauntlet to Joshua for a ‘Battle of Britain’ later this year, marking an astonishing twist in the heavyweight picture.

‘Anthony Joshua,’ he said, ‘I know you’ve just lost a fight to Usyk; you’re beltless at the moment. I’d like to give you an opportunity to fight me for the WBC heavyweight championship of the world, and the lineal championship, in the next few months.

‘You’re coming off a 12-round fight so you’re match fit, you’re ready. I’m giving you a few months’ notice. If you’re interested, I’ll send you the date over, and we can rumble. A battle of Britain for the heavyweight championship of the world.

‘Let me know if you’re interested. If not, I will select another opponent.’ 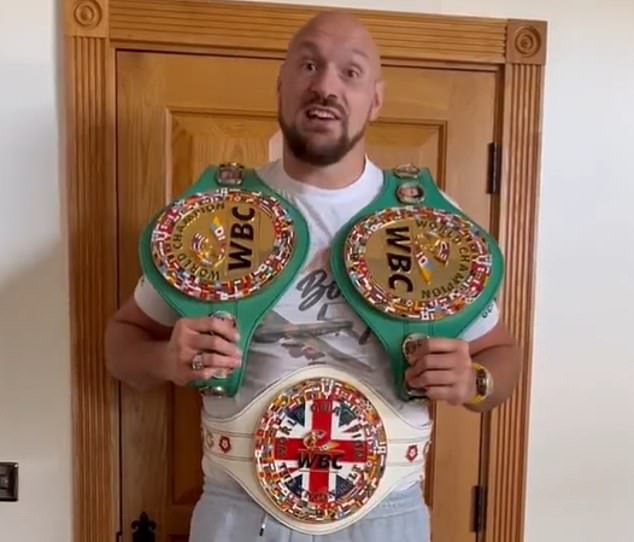 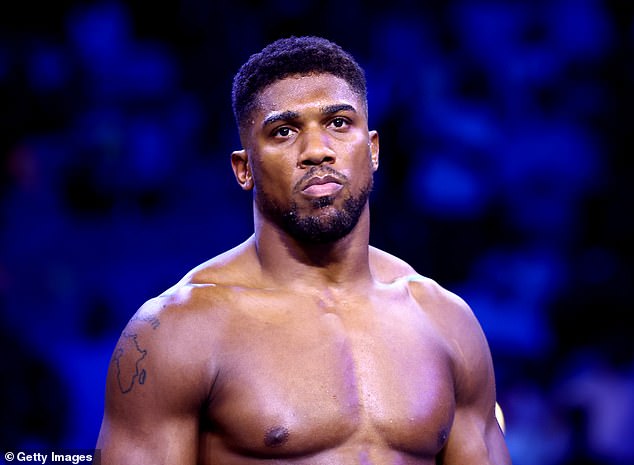 Joshua, presented with the most unexpected of dangling carrots, has already accepted the challenge from his arch-nemesis, urging Fury to contact his management team if he is indeed serious about making it happen.

Fury has moved quickly, offering Joshua a 60/40 purse via a video on Twitter in return for a shock defence of his title.

Fury said: ‘I’m being bombarded with messages of how much am I going to pay AJ.

‘He doesn’t have any excuses now not to take it, he can’t say I’ve lowballed him by offering him 20 or 30 per cent.

However, there is already disagreement over where the fight will actually take place – and when.

Fury’s promoter Frank Warren has insisted that the bout should take place in the UK  and in November ‘to deliver to the British fans’, but his counterpart Eddie Hearn believes this will be difficult to achieve.

Hearn claims that only the Principality Stadium in Cardiff offers a realistic opportunity to host the bout, and that a lot of money would be ‘left behind’, before admitting that finances were financially stable enough for both fighters for it not to be too much of a concern. Joshua’s camp is also more favourable to a December bout.

Jumping straight into a clash with Fury, universally recognised as the No 1 heavyweight in boxing right now, would of course represent a major risk on his and promoter Eddie Hearn’s part. Consecutive losses against Usyk have already sent Joshua slumping back to the drawing board; crestfallen, confused and in need of a full reset. Where would a third, on the biggest stage there is, possibly leave him?

The risk vs reward balance may tip too heavily towards the former when assessing their options. Instead, returning against lower-ranked opposition, spending more time with new trainer Robert Garcia and regaining confidence could be a smart move if Joshua still has any aspirations of becoming a three-time champion.

But what about the glass-half-full mindset?

Beating Fury, admittedly a long shot given their contrasting fortunes over the past year, would instantly propel Joshua back to the heavyweight summit and resurrect his faltering career – not to mention thicken his wallet. After losing back-to-back fights, it could be too big of an opportunity to turn down. 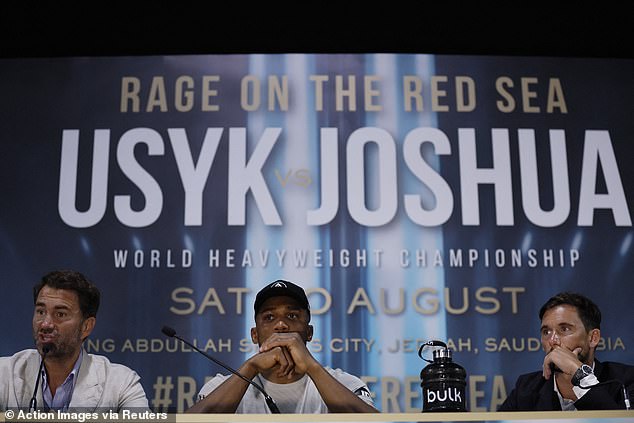 But AJ and his team have a big decision to make, with the threat of a third straight defeat making it a risky proposition 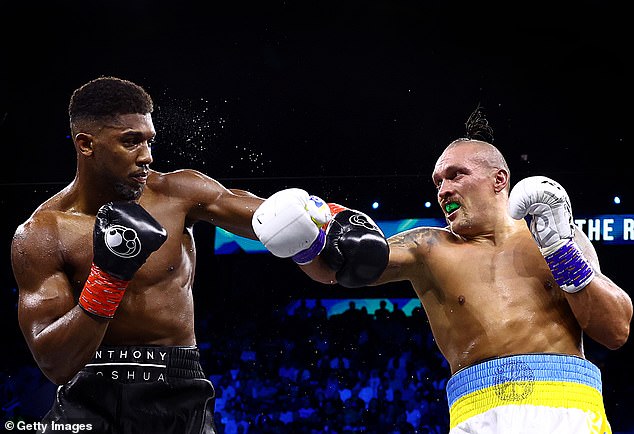 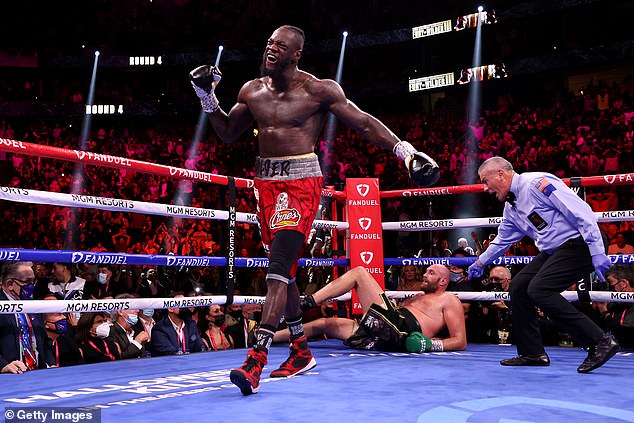 While he would certainly be the underdog, the former Olympic champion and his team may draw confidence from an improved showing against Usyk, arguably the most intelligent pugilist on the planet, and the idea that Fury could be an easier target to find.

The latter was easier to hit than usual in his enthralling victory against Wilder 11 months ago, when he came tumbling to the canvas – and the brink of defeat – in a sensational fourth round before turning the tables and claiming a knockout late on.

The optimist in Joshua may well lick his lips at an immediate tilt at redemption in a fight he and Hearn have always felt confident of winning, however foolish that sounds at this moment in time.

When any talk of retirement was quickly squashed in Saudi Arabia last month, Hearn pinpointed December as a potential return date for AJ and he will need to box again before the end of the year to honour his new broadcast deal with DAZN, which includes a minimum of two fights per year.

The other option is to select a more straightforward challenge in December, allowing him to find his feet again in with a top-15 ranked opponent such as Filip Hrgovic, Andy Ruiz Jr or Dillian Whyte.

Nevertheless, with Fury also on the hunt for a Christmas cracker to round off the year, the stars could have finally aligned for Joshua to cross paths with his long-time rival. 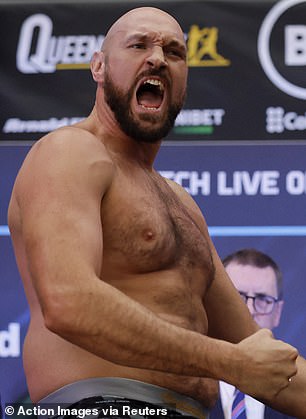 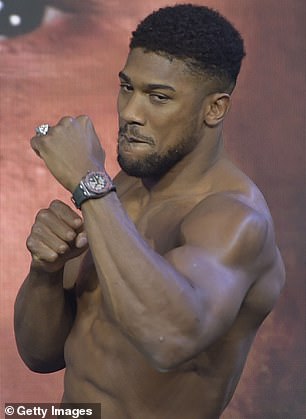 We all thought a historic undisputed showdown between the Brits was on the cards last year when, after agreeing a two-fight deal that summer, Wilder fittingly produced a knockout blow at the death by winning a legal case which ordered Fury to instead face him for a third time.

Since that dramatic plot twist, Joshua now brings two more defeats and no heavyweight belts to the table, meaning a Fury matchup does not have quite the same allure or star appeal it did 18 months ago.

Fury would be expected to prevail, perhaps inside the distance, and set up an intriguing encounter with Usyk early next year.

But after years of promoter politics, mandatory challengers, ring exiles and defeats getting in its way, a Fury vs Joshua grudge match may now be on the horizon with few obstacles blocking its path. Even if it no longer promises as much.