The Ben Simmons saga has another twist.

The 76ers fined Simmons for missing Thursday night’s 109-98 victory over the Detroit Pistons, according to ESPN. That came one day after Simmons told Daryl Morey, the Sixers’ president of basketball operation, he still wasn’t mentally ready.

Simmons was fined $US360,000 ($486,000) for missing the game. The Sixers plan to continue fining him until he resumes his basketball-related obligation and cooperates with their medical team on his mental health issues.

Simmons’ refusal to accept the Sixers’ assistance to address his mental readiness to play is frustrating the organisation. The disgruntled point guard has been working instead with mental health professionals through the National Basketball Players Association since this summer. He has not shared details of those meetings with the Sixers.

He has, however, received treatment from the team doctors for a back ailment. In addition to receiving treatment, he’s participated in individual shooting drills. Simmons has yet to become a full participant in team activities at the Sixers’ practice facilities.

Before Thursday, the three-time All-Star had been fined close to $2.7 million for missing five games (four exhibitions), practices, and meetings. 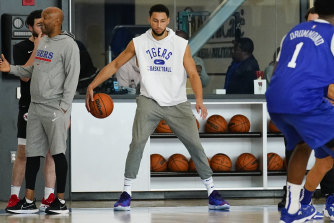 Ben Simmons has been fined again by the Philadelphia 76ers.Credit:AP

Coach Doc Rivers even kicked Simmons out of practice on October 19 for not engaging and refusing to participate in an on-court drill. Three days later, Simmons complained of back tightness ahead of a scheduled individual workout at the practice facility. Even after being treated and cleared to work out, he left the practice facility without participating in drills.

The next day, Simmons informed the Sixers he was not mentally ready to play. As a result, they had to stop fining him due to a provision in the NBA collective bargaining agreement that protects players’ salaries for not rendering services if it is because of a mental disability.

Prior to these recent developments, Simmons said he wanted to be traded in a meeting with Sixers executives, and later communicated that he believes his partnership with the team and Joel Embiid has run its course.

The Sixers (7-2) are the most unlikely team atop the eastern conference standings. Yet, there they are, a half-game ahead of the second-place Miami Heat, thanks to a five-game winning streak.

The Sixers have had their hands full with the Simmons saga, injuries and bouts with COVID-19.

On Thursday, the Sixers only had nine available players against the Pistons.

The undermanned Sixers will look to defeat the Chicago Bulls for the second time in four days on Saturday night at the United Centre. They defeated third-place Bulls (6-2) by five points Wednesday night at the Wells Fargo Centre.