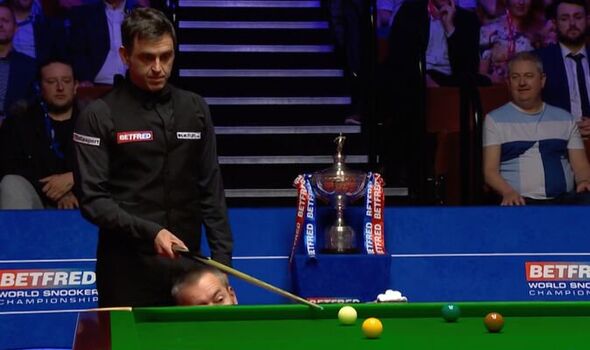 Ronnie O’Sullivan was involved in yet another ref row on Monday during his World Snooker Championship final with Judd Trump. O’Sullivan finished Sunday in total control at The Crucible, leading his fellow Englishman 12-8 after continuing the supreme form he’s shown throughout in Sheffield. He currently leads 14-11 after Monday’s first session.

But throughout the final, O’Sullivan has had tense relations with match referee Olivier Martell. They came to a head again in the opening session when O’Sullivan appeared to try and obstruct Martell as he sought a clear view of where he could re-spot to white.

O’Sullivan’s has had an ongoing battle with Martell, which seemingly began when ‘The Rocket’ complained about the movements of a security guard. The pair later argued about ball placement and then had a further spat – although it was not clear what about exactly.

During the verbal altercation, the six-time champion saying said to the official: “You tell me what you saw. You saw nothing. Go and look at the camera. You saw nothing.” He later told reporters that he believed Martell was “looking for trouble”.

Trump fought back in the first four frames on Monday, taking three of them to reduce the deficit to 13-8. He continued to battle back after the mid-session interval, again taking the session 3-1 to leave matters at 14-11 in the best-of-35 encounter.

If O’Sullivan does prevail, he’ll draw level with Stephen Hendry on a record seven world championship titles. In contrast, Trump is after his second crown in Sheffield, having captured the crown in 2019.