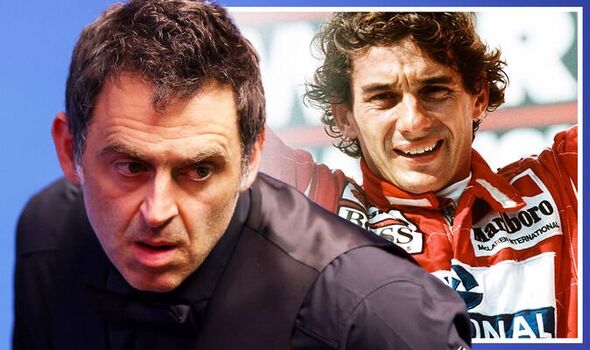 O’Sullivan, 46, has regained the world No1 spot for a fifth time in his illustrious 30-year career – and has successfully negotiated the first round at the Crucible. But as well as plotting his way to another triumph at the blue-riband event O’Sullivan is being followed around by a film crew making a Netflix-style access-all-areas documentary about his life.

And he hopes the end result will be as good as the BAFTA-winning movie about the brilliant Brazilian three-time world champion – who tragically lost his life in a crash at Imola in 1994. O’Sullivan said: “I’ve watched a few sports documentaries myself, and I like the Ayrton Senna one, that’s one of my favourites.

“It depends if you buy into the character and Ayrton Senna…I loved him. It was more about his human side. The racing is what we all knew him for, but when you heard what he was like as a person, plus the way he drove the car, it was just incredible. It was inspiring to watch the Senna film.

“He would have had an aura about him as an individual thinker and a very driven man – very focused on being the best. He was quite intimidating for the guys who were up against him. I think Michael Schumacher came across a bit like that in his documentary.

“Miki Hakkinen said to him: ‘Michael, why you do this, we are going to kill each other,’ and Schumacher just looked at him as if to say ‘what are you talking about?’. That’s because he was scary, and Senna was a bit like that. And in snooker Stephen Hendry was like that.

“They are just born winners. I’m not quite like that, but a bit different. I am a bit more artistic in the way I go about it. I am more like if I play well, I’m really happy with that, if I get a result, then that is a bonus. But I expect to get a result if I play well.

“I look at it more that way than thinking I don’t care how I play, as long as I get the W. I would never really enjoy playing s**t and winning. So in that way we are very different characters and it’s quite weird how I am drawn towards someone who is the opposite to me.”

The documentary team are at the Crucible having also been at the Masters and the Tour Championship earlier in the season. And O’Sullivan says there is nothing they cannot film. He added: “I told them you’ve got as much access as you need. I said, you can come anywhere you like.

“If we’re going to do it let’s do it bloody good, because people are going to watch this and I don’t want them to be short-changed. There’s going to be bits that they’re not going to see with other sports people. Let them see the pressure, the stress, the good and not-so-good, what it’s like to live that life.”