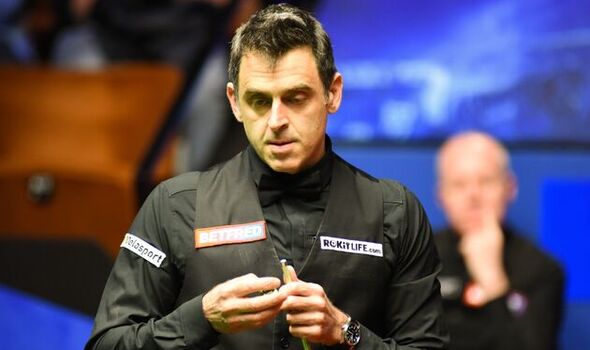 Ronnie O’Sullivan claimed he “doesn’t care” about his shock Northern Ireland defeat despite having a star guest in attendance to watch him play. The pre-tournament favourite crashed out against world No 49 David Grace, throwing away a 2-0 lead to crash out 4-3 at Waterfront Hall in Belfast.

Keen runner O’Sullivan was watch by Irish middle distance track legend and three-time Olympian Eamonn Coghlan, but could not deliver him a win. He said: “David deserved to win. I can’t even begin to analyse my games these days but I’m out and look forward to doing some other bits and pieces.

“I feel very neutral about everything now which is a nice place to be. Eamonn was in there watching today, the ‘King of the Boards’. He is a friend of a friend and wanted to come and watch. Would it have been nice to win for him? I just don’t care enough these days.”

O’Sullivan won a seventh world title at The Crucible this year, and implied that’s all he needed to focus on in future: “As long as I do one good tournament a year, I’ll be all right. That’s enough, the rest is complete garbage. I don’t really care and the gig ain’t worth the stress, and the sport gets what it deserves.”

Grace, a former semi-finalist at the UK Championship, obviously had different emotions, saying: “It is the biggest single win of my career, because he is so hard to put away in front of a big crowd. It is always up there and a massive occasion playing Ronnie. The last time didn’t go too well, so this one was nice.”

Iornically, the part-time painter once drew up a picture of the icon he’s now beaten. And he overturned the 4-0 thrashing he received at the hands of the world No 1 in the 2018 Welsh Open, where he only claimed 13 points.

“The difference this time to that one was that he gave me a lot more chances. Last time he never missed, and he missed quite a few today,” added Grace. “The painting of Ronnie was probably the last one I did last summer, it was from when he won his sixth world title with the trophy. But I don’t get so much time to do it these days.”

Only last week, O’Sullivan “vowed to do his own thing” as he hit out at the sport’s bosses. He argued that not enough is being done to improve professional tournaments.