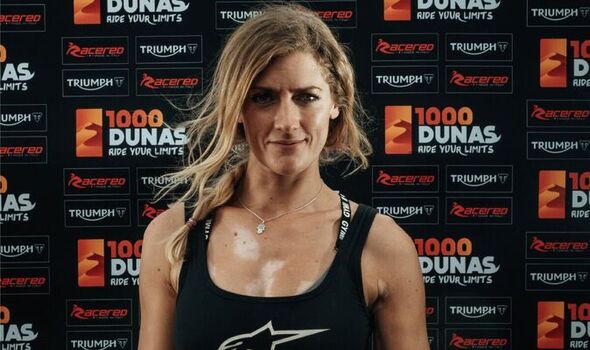 When a freak bicycle accident threatened to rip away the extreme sport lifestyle she loved, Vanessa Ruck, aka The Girl on the Bike, refused to accept such a fate. Instead, she handled the adversity in the way only she knew how: to set a goal and smash it.

On episode number 27 of Express Sport’s Women in Sport series #SheCan, the Monmouthshire-based motorbike racer, rider and adventurer shared her incredible story with social media editor Laura Hartley of how the mental and physical recovery from an accident seven years ago became the catalyst to her becoming one of the most successful and pioneering female motorcyclists in the world.

On an innocuous Tuesday evening after work seven years ago, a car failed to stop a red light and hit Ruck on her bicycle while travelling to see her husband and friends for an evening of wakeboarding.

“Like that, life as I knew it changed,” Ruck said.

Ruck said her accident wasn’t “graphic”, but she admits to feeling “shaken up” from the episode. She travelled by ambulance to hospital but was dispatched later that evening with bruising.

“Now if we fast forward seven years, because that comprises the bulk of my recovery, I’ve since had seven surgeries, including a reconstructed right shoulder and right hip,” Ruck explained. “So when you think about the implication of bruising versus the actual reality it kind of gives you an idea of the battle that it’s been.”

It was while being bed bound after her third surgery, the first on her hip, that the idea for a motorbike first struck Ruck and after telling her husband, the purchase was made.

“It was five months until I could even sit on it, but it was there as a goal, as a reminder, in this moments when I couldn’t find the energy to even try to get out of bed or do my physio because I was hurting so much, that bike was there as a reminder, like ‘come on, Vanessa, you want to come ride me,’. That goal setting in recovery is so important.”

Despite an expectation to free herself of pain eventually, Ruck has come to the conclusion that she will never lead a pain-free life, but after a number of months spent bedridden, it is a concession she is more than willing to mould her life around.

“I can get up, I can make the most of every day, I’m not stuck in bed anymore,” she said.  “There’s lots of things that I can’t do. If you asked me to run for a bus, like no, that’s not something my body can do. But I can adapt, I can shift, and learn different things.”

It is the mentality that has propelled her to such fantastic heights in recent months, growing her from a self-professed motorbike novice to the first female to ever finish the 1000 Dunas – a seven-day rally across the Moroccan desert – on a large capacity adventure bike.

“It was brutal, it was absolutely incredible but my goodness, I know why I am the first female to have taken that on,” Ruck said. “You’re in the middle of the sand dunes going, what am I doing?

“But I suppose because I’ve had such lows, and I know what being stuck in bed, staring at the same annoying bit of paint on my bedroom ceiling feels like, I’m really determined to prove to myself that I still can.”

Ruck upped the ante before the 1,500km rally had even begun, riding her Triumph Tiger 900 Rally Pro motorcycle from the UK to Granada, Spain (the race’s starting point) and carrying all her camping gear, tools and spares with her.

The episode is a microcosm of Ruck’s ambition to go the extra mile in all that she does. While her mission is to prove herself that she can, she is also on a mission to prove that women can.

“As a small female in the middle of the desert who always has her mascara on, you do get the odd stereotype sometimes,” she said. “They’re judging me by my looks. They think I’m not credible, I can’t ride a motorbike, what am I doing here, this is ridiculous. But thankfully that’s only a small portion. And I’m determined to try to learn and grow and be the best version that I can be, try to learn the mechanics of my bike, be a better rider so that actually, you know what they can judge me and look at my appearance but when I get out on the bike, they’ll be like, oh, wow, girls can really do this too. So I’m on a mission.”