Sydney Kings owner Paul Smith refuses to blame fans who choose not to attend games in the coming weeks as the NBL faces a major dip in attendances while COVID-19 cases soar.

Smith said the decline in attendances was a “bummer”, given the growth of the sport in other areas, but that he was working with the league to get on with business as the season stands on a knife’s edge.

“The whole situation is just a buzzkill,” Smith said. “We’re certainly being impacted by attendances and ticket sales at the moment. But I’m not critical of fans that are staying away.”

The next Kings game is on January 8. This week, sister team the Flames reported a positive COVID-19 case within the squad. It forced the postponement of their Wednesday game against the Bendigo Spirit at Brydens Stadium.

After three years of postponements and cancellations in the NBL, Smith said something had got to give. 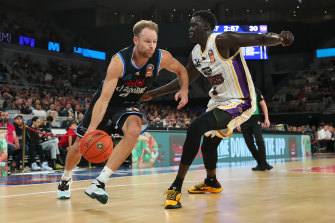 Despite a significant drop in attendance, the Kings are confident their fans will keep watching any way they can. Credit:Getty Images

“The Prime Minister was saying it today. They are pretty much saying, ‘this is it, this is [how] life’s going to be’,” he said.

“And now I think the choice is there. People who want to tuck themselves away and isolate can do so and those who just accept that this is where we are and where we are going will have to adjust to it.

“We’re moving into that mode and I’m certainly encouraging the league to do so, too. You’re just going to play whack a mole in the end and I’m trying to be pragmatic about it.”

The seventh-placed Kings need all the points they can get after going down 82-68 to Melbourne United on Sunday at Qudos Bank Arena.

Sydney coach Chase Buford was quick to blame the officials for the loss and said he would get in touch with NBL head of referees Scott Butler following a host of non-calls he felt went against the Kings.

In one of the most physical games of the season, the referees seemed reluctant to blow their whistles, with the final foul count reaching 29, 16-13 in United’s favour.

“Melbourne’s ‘D’ was really physical with us. To be honest, I don’t think we got a great whistle at the rim,” Buford said.

“We out-shot them by 15 attempts in the paint, they shoot more free throws. If you understand the math of the game, that doesn’t really add up too much.”

Smith said as an owner he wouldn’t comment on on-court dramas but, as a fan, he felt similarly to Buford.

“In my own circumstance, I don’t think I have the technical knowledge to be bringing a perspective to it. But as a fan, I certainly feel aggrieved,” he said.

The NBL has already been forced to postpone three games, with the clubs joining in a COVID-19 meeting on Thursday afternoon.

The majority of the Illawarra roster returned positive COVID tests in recent week, which has forced the team into isolation until January 1. The Hawks’ next scheduled game is at home against Melbourne United on January 9.