A huge Formula E crash led to a race in New York being abandoned as four cars were involved in a chaotic pile up. The race was plagued with weather problems, as the heavy New York rain piled its way down onto the track.

It took just 10 minutes for the adverse weather to take over, with visible puddles being left out on the track. And it was one of these puddles that led to the carnage at turn six. As a result, as the leading pack mate the puddle it led to the majority of them spinning out and crashing into the trackside barrier.

As a result, Nick Cassidy, Lucas di Grassi, Robin Frijns and Stoffel Vandoorne were all involved, as their cars began a mass pile up in the corner of turn six. Of the leading four, only Frijns managed to escape the chaos unscathed.

Meanwhile, Cassidy, di Grassi and Vandoorne all suffered substantial damage to their cars after smashing into the barriers and crashing off each other. Sebastien Buemi was also caught up in the pile-up, as was Edoardo Mortara however he managed to get back to the pits. 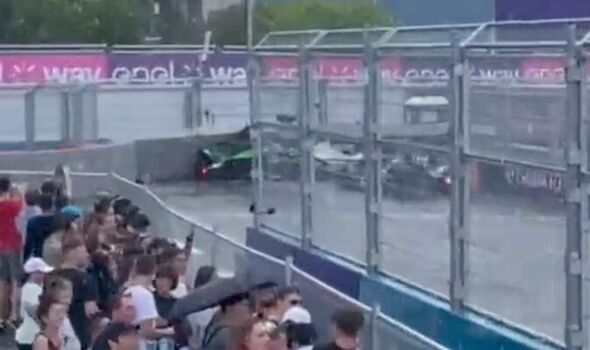 Following the crash, the New York track team attempted to rebuild the barriers for around 20 minutes, but this proved to be in vain as the race was eventually cancelled. Despite the abandonment, the race still provided a result as Nick Cassidy came away with his first Formula E win.

The win was gifted to Cassidy after he was the man leading the race before the chaotic crash took place. As a result, Di Grassi was the driver to take second place for ROKiT Venturi Racing whilst Cassidy’s Envision teammate Frijns came in third.

“Obviously I was very disappointed initially and felt like I did everything right today, felt like that it was in the bag with 10 to go but then it started raining a little bit, and yeah I was initially very disappointed considering that.” Defending the decision to give him the win, he added: “I mean I am biased but I think it is the right decision.”