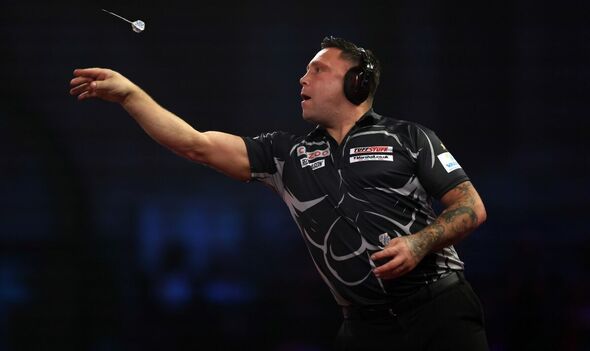 Gerwyn Price has sensationally threatened to never return to the World Darts Championship following his eventful quarter-final exit to Gabriel Clemens. The Welshman faced a barrage of boos throughout the quarter-final match from the Alexandra Palace crowd.

And he stunned everyone by arriving back out to the arena for the fifth set donning a huge pair of ear defenders on his head. The ‘Iceman’ had spoken previously in the tournament that he would be tempted to try them out at the Oche.

After his 4-0 whitewash of Raymond van Barneveld, Price said: “If Raymond had been in the match better and the crowd had turned against me more, I probably still would have done it. But now it wasn’t necessary.

“And by the way, it’s not just about headphones, but then I put in earplugs. I first tried it at home during the Christmas break just with earplugs in, but then I still heard too much. With the headphones in, I couldn’t even hear my kids anymore; then I knew it would work well.”

But the atmosphere inside the Alexandra Palace on Sunday night was clearly too much for Price. After going 3-1 down, Price emerged with huge ear defenders on to try and block out the noise.

It failed to help his game as he went on to lose the next two sets, knocking him out of the championships. Price was clearly still affected by the barrage of boos he faced after his defeat, taking to Instagram to hint that he’ll never play the World Darts Championship again.

“So frustrating, you play all year round preparing for this one tournament,” the message read. “So gutted I wasn’t let play but Good luck everyone left in. Not sure I will ever play in this event again.”

Sky Sports’ Wayne Mardle says he “understood” why Price chose to wear the ear defenders, but paid credit to Clemens for coming out on top. He said: “The situation with Price is that he has had his ear defenders with him prior to this game and it was something he was thinking of doing.

“It shows there is a bit of frailty there. I get why he did it, he wanted to put on an elaborate show. Clemens played exactly how I thought Price would play. Clemens was amazing. He was way the better player so let’s celebrate what he did.”