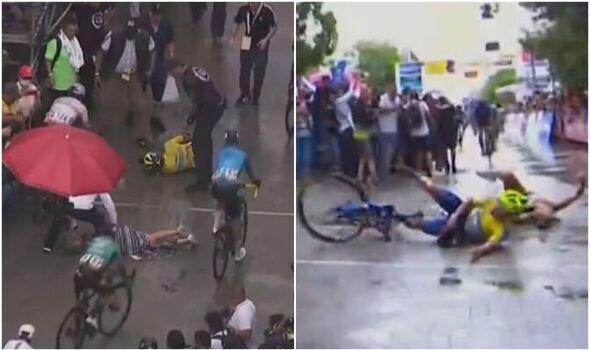 Colombian cyclist Luis Carlos Chia clattered into his wife in a scary post-race crash at the Vuelta a Colombia on Sunday. Chia had just pulled off a miraculous fightback over the closing meters of the third stage, only to fall in the treacherous conditions as both he and his partner were seen to by doctors.

Chia was nowhere to be seen with around a minute of the race to go as Oscar Quiroz powered into a commanding lead. But the former came from nowhere to launch a perfectly-timed fightback and snatch victory on the line.

The 25-year-old was already leading the Vuelta a Colombia after winning the opening stage, which is why his wife was ready and waiting shortly after the finish line. But having raised his arms in an exhausted celebration, Chia re-gripped the handlebars too late to swerve out of the way and he clattered into his partner.

The treacherous conditions certainly did not help, and riders were all soaked to the skin after racing on partially-flooded roads. Both Chia and his wife went down hard as commentators and onlookers gasped at the frightening collision.

Despite the initial shock, both Chia and his partner are reportedly doing well after being patched up by doctors. One witness told De Telegraaf: “She is conscious. The doctors have put four stitches on her and she will be under observation for the next few hours.”

After taking victory and dusting himself down, Chia told AS: “First, thanks to god, my team, my staff, my people and my wife. Three days as the leader with two stage wins, the first and the third, I think it’s a dream.

On his wife, he added: “[Where she stood] is a space for photographers. It could have been her, it could have been four other people. It was raining, as you saw, and I wanted to brake but I fell in front of her.”

The fourth stage of the Vuelta a Colombia will get underway on June 6, meaning Chia won’t have had long to lick his wounds before getting back on the bike and fighting through a gruelling 158.4km route.