Kevin Durant warned his Brooklyn Nets team-mates not to ‘cry over spilled milk’ after they were humiliated in a first round sweep by Boston.

Jayson Tatum scored 29 points before fouling out late in the fourth quarter as the Celtics never trailed and completed a four-game sweep in their Eastern Conference first-round series by holding on for a 116-112 victory Monday night in New York.

The second-seeded Celtics, who lost to the Nets in five games in this round last season, await the winner of the Milwaukee-Chicago series. The Bucks lead the Bulls three games to one.

‘No regrets,’ Durant said post-game. ‘No crying over spilled milk. It’s about how we can move forward… s**t just happened. 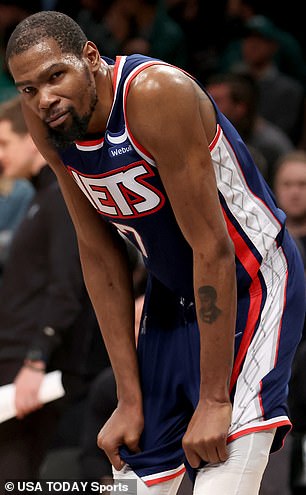 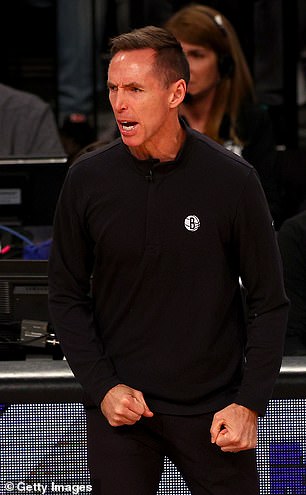 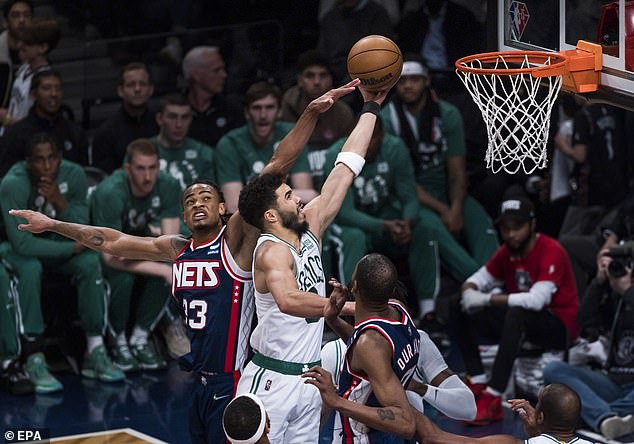 ‘This summer is going to be a very, very important summer for our organization. We’ll see where we go next year.’

In front of a number of Boston fans who made the trip to New York, the Celtics led by as many as 15 before sweating out the final minutes after Tatum was called for a pair of offensive fouls.

Tatum, who hit the buzzer-beating layup in the series opener and scored 39 points in Game 3, made nine  of 16 shots, including the tiebreaking 3-pointer early in the second quarter that gave Boston the lead for good.

Jaylen Brown added 22 points for the Celtics, who shot 47.2 per cent and won each game in the series by single digits. Marcus Smart added 20 points and 11 assists, Grant Williams hit four 3-pointers and contributed 14 points and Al Horford chipped in 13. 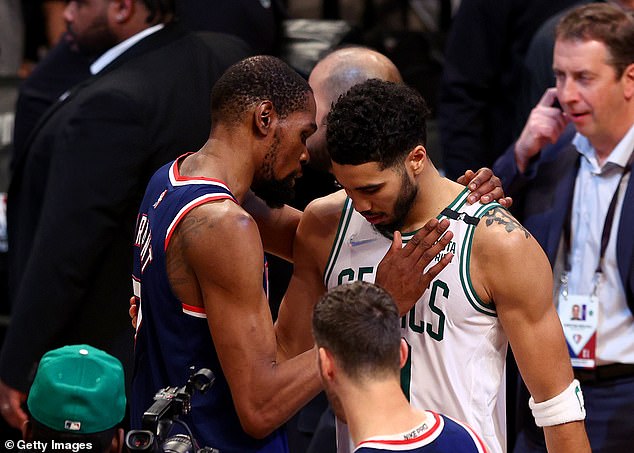 ‘Somebody like [Durant], he brought the best out of me,’ Tatum said.

‘I knew I had to be on top of my game in this series. But in the same breath, I wasn’t surprised by how I played. I do feel like I’m one of the best players.’

Durant scored 39 for his best game of the series but missed two 3-pointers in the final minute as Brooklyn ended a season it had entered as an NBA title favorite. Seth Curry added 23 points, Kyrie Irving finished with 20 and the Nets shot 50.6 per cent

Pressure is mounting on Nets head coach Steve Nash but Durant wants to see the former league MVP given another run.

‘Come on, man,’ he fired back at a reporter. ‘Steve has been given a crazy hand the last two years, he’s had to deal with so much as a first time head coach, Covid, trades. I am proud of his passion for us.’

Pascal Siakam scored 23 points to help the visiting Raptors stave off elimination courtesy of a 103-88 victory over the 76ers in Game 5 of their Eastern Conference first-round play-off series.

Siakam added 10 rebounds and seven assists for the fifth-seeded Raptors, who have won two in a row after losing the first three games in the best-of-seven set. Pressure is building on Doc Rivers’ Sixers given no team has ever surrendered a 3-0 series lead in NBA history.

Precious Achiuwa made seven of 11 shots to finish with 17 points for the Raptors. OG Anunoby and Gary Trent Jr. each had 16 points and NBA Rookie of the Year Scottie Barnes added 12 points and eight rebounds of his own in the win.

Toronto, who played without All-Star guard Fred VanVleet, shot 51.2 per cent from the floor and enjoyed a 56-36 edge in points in the paint as they look ahead to levelling the series at the Scotiabank Arena Thursday in Toronto. 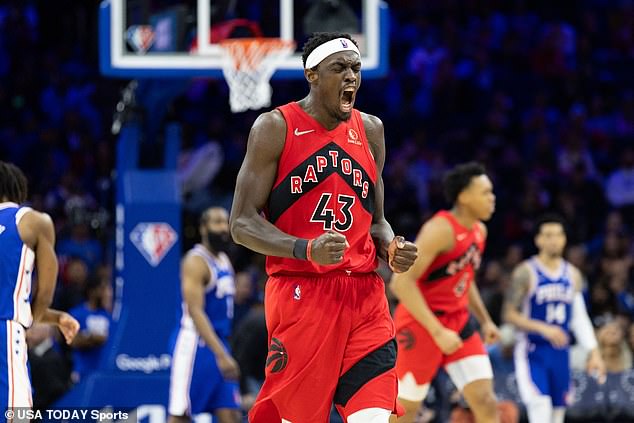 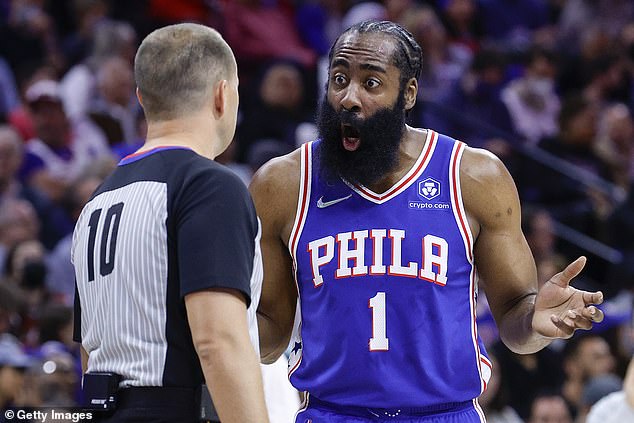 It was another difficult night for James Harden and the Philadelphia 76ers, who are up 3-2

Philadelphia’s Joel Embiid collected 20 points and 11 rebounds as he battled through a torn ligament in his right thumb.

Tobias Harris added 16 points and James Harden added 15 for the fourth-seeded 76ers. Harden, however, made just four of 11 shots from the floor and offset his seven assists with five turnovers.

‘I’ve been saying all season, since [Harden] got here, he just needs to be aggressive and needs to be himself,’ Embiid said afterwards.

‘That’s not really my job. That’s probably on Coach to talk to him and tell him to take more shots.’

Luka Doncic delighted the crowd in his first home play-off game coming off a calf injury with 33 points in a blowout win over the Jazz.

The young Dallas superstar added 13 rebounds as they routed Utah 102-77 on Monday night for a 3-2 lead in their first-round series.

Doncic made his series debut in Game 4 at Utah, when the Jazz scored the last five points in the final 31 seconds for a one-point win that evened the series. But the Slovenian superstar never let Game 5 get close.

‘For his second game, it looks like he’s been playing this whole series,’ Dallas coach Jason Kidd said. 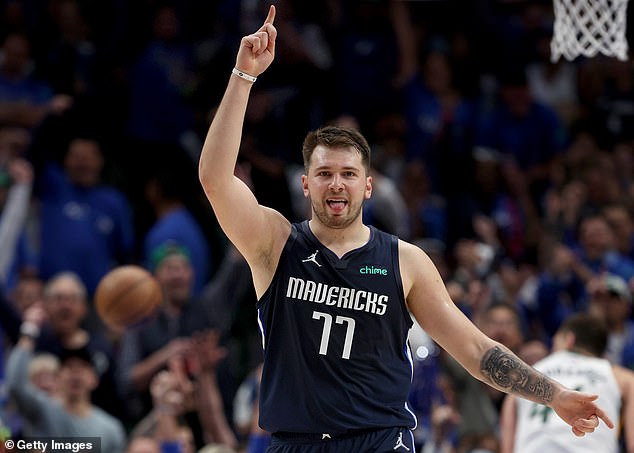 ‘His conditioning, his effort on the defensive end. As we talk about rebounding, he’s one of the best for us and he did that tonight.’

After the first four games were decided by eight points or less, Utah never had a chance in this one after a nearly six-minute scoreless drought in the second quarter that fueled a 22-4 Dallas run on the way to a 52-36 halftime lead.

Game 6 is Thursday night in Salt Lake City, with the Jazz regaining their formidable home-court edge, but facing the long odds of just 18 per cent of teams winning a series after dropping the fifth game when the teams split the first four.

The Mavericks haven’t advanced in the post-season since winning the 2011 championship. Utah are in the play-offs for the sixth consecutive year, but has yet to get past the second round in that stretch. 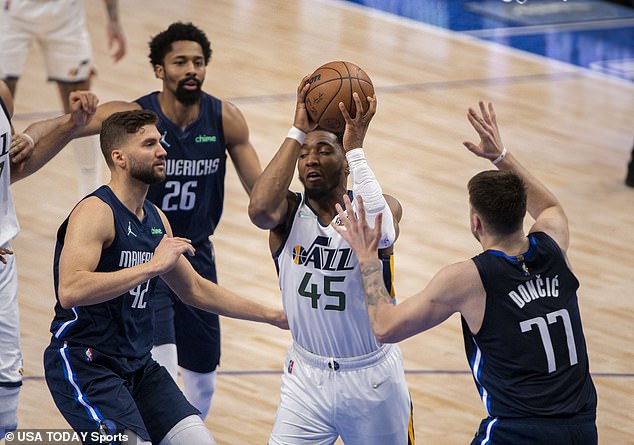 Donovan Mitchell, who averaged 30 points in the first four games, scored just nine and missed all seven of his 3-pointers before leaving with a left hamstring injury in the fourth quarter. He will get an MRI on Tuesday.

‘They’ve scrambled extremely hard,’ said Mitchell, who is shooting a measly 20 per cent from 3-point range after being well over 40 per cent the past two play-off years.

‘It’s a lot to continuously run teams off the line, and they’ve done a good job of it. They’ve made us uncomfortable.’