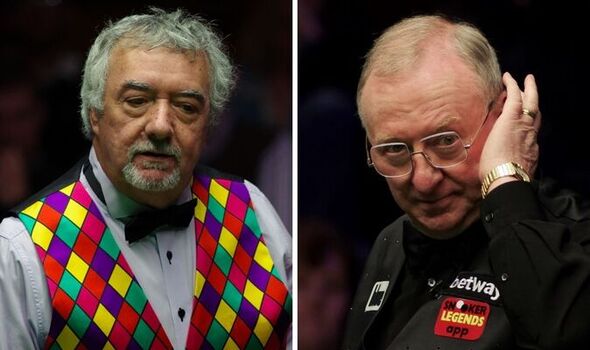 Legendary snooker commentators John Virgo and Dennis Taylor are facing the axe from the BBC next year following the conclusion of the 2023 World Snooker Championship, according to reports. It’s a move that 76-year-old Virgo had anticipated having declared he was expecting to be moved on last September.

Nonetheless, coverage of the sport is unlikely to ever be the same again without the ‘voices of snooker’.

Virgo’s famous catchphrase ‘where’s the cue ball going’ is now considered to be one of the most iconic in British sports broadcasting.

However, it now appears the duo’s time at the top is slowly coming to an end.

According to The Telegraph, Virgo and Taylor have been ‘granted a stay of execution’ by the BBC until after the 2023 World Championship. They had originally been expected to leave after this year’s tournament.

Yet the decision has been received in good faith by Virgo, who is refusing to get too caught up on something that remains out of his control…

“I wouldn’t have been like this 30 years ago, I would have been fighting my corner,” Virgo said last September.

“But I’ve realised – and it’s taken me a long time to realise it – not to get caught up in something you have no control of. I can’t have any bad feelings.

“Maybe it’s a working-class attitude I’ve been brought up with but there’s b***** all I can do about it, so why get bothered? I’m not going to go round on my hands and knees begging for a job.

“I’m past that. So I’ll just get on with what I’m doing, enjoy it and treasure every moment. I understand that you get over a certain age and they want to try something different.”

The “life-changing” experience would last 11 years and is remembered fondly.

“We replaced Question of Sport in their slot and the viewing figures were better than they had from the first day,” Virgo added on the show.

“We were up against Blind Date and we were getting as many viewers. It was incredible.”

Virgo also took the time to defend Davidson, who has since claimed he was ‘paid £1million to go away,’ following his stint hosting the show.

“Jim is a comic genius and yet he can’t appear on television, because he has a black mark against his name,” Virgo added.

“It’s understandable. I just feel it’s a waste of a talent.”