Australia have never done this before. We have never had a Commonwealth Games running straight out of a World Athletics Championships.

Two weeks ago Australia enjoyed one of the country’s most successful world championships performances in track and field. Two gold medals and a bronze – all won by women – and three more women who were only fractionally out of the medals. This was one of the interesting points of the Eugene world champs, that Australia’s women performed so strongly and led the team. 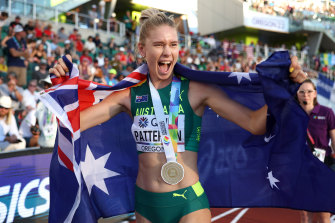 The back-to-back championships have taken a physical toll, with Olympic bronze medallist Ash Moloney forced to withdraw from the decathlon and hurdler Liz Clay breaking her foot in a fall at the worlds.

But the competition in the track and field in Birmingham will still be fierce.

If the depth in some Commonwealth Games sports is thin because of the absence of Olympic superpowers the USA and China, the same criticism cannot be made of athletics.

On the track, Commonwealth countries from the Caribbean have long dominated the sprints, the east african countries are middle distance running factories of elite talent and the English and Canadians continue to produce world champions across the board.

For evidence of a quality field look no further than the men’s 100m sprint, which opens the program with heats on Tuesday night (AEST) where Australia’s Olympic semi-finalist Rohan Browning is hoping to bounce back from his disappointment at the world championships in Eugene, where he ran a sluggish 10.22 seconds and did not make it out of the heats. 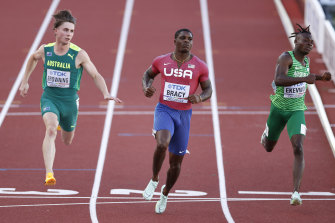 The field for the men’s 100m in Birmingham includes 11 athletes who made the semi-finals in Eugene and yet none of them stands out as the clear favourite. The reigning Commonwealth champion Akani Simbine from South Africa will be strong again.

The Jamaican trio appears likely to be 20-year-old rising star Ackeem Blake, Conroy Jones and Kemar Bailey-Cole who are all potential finalists along with Kenyan star Ferdinand Omanyala and England’s Reece Prescod.

Ghana has Benjamin Azamati who has run 9.90 this season and Joseph Amoah, who has run 9.94 this year. Neither did well in Eugene but their times show the depth of the field.

Kenya’s Omanyala is one to keep an eye on. Hailing from the home of some of the greatest ever distance runners, Omanyala is a sprinter. He is the fastest-ever African and has run the eighth-quickest time in the world.

The field is where the Australians are expected to excel. On Tuesday, big Matt Denny will be throwing the plate having finished five centimetres from a bronze medal at the Tokyo Olympics. He is getting better each competition and should be in the medals.

Pole vaulter Nina Kennedy is coming off a bronze medal at the world championships and should win gold here on Wednesday morning, AEST.

In the high jump Australia doesn’t need other countries to create a world class competition. It is the one sport where our national titles now are the equal of any world championships. Eleanor Patterson just won world gold and Nicola Olyslagers (formerly McDermott) is the Olympic silver medallist from last year and only just missed out joining Patterson on the dais in Eugene. The women’s high jump final is on Saturday night, AEST. 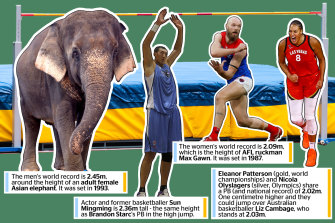 How high would you have to jump to win gold? Credit:The Age

Ditto the javelin. Australia’s world superstar Kelsey-Lee Barber won a second successive world gold to go with her bronze from the Olympics, but her preparation was disrupted when she was diagnosed with COVID-19 just before the Games. During the final of the worlds it looked like Australia could have the quinella until Mackenzie Little was eventually edged out of the medals.

In Birmingham the competition will be hot between the two Australian women for the gold. The javelin is on the last day at the track, on Sunday night AEST. 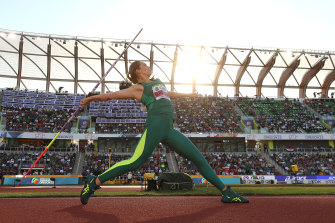 Brooke Buschkuehl is Australia’s new national record holder in the long jump and in Eugene was just two centimetres away from the medals. She manages two auto-immune diseases, has had serious foot and injury problems, contracted COVID in the past year and recently still managed to jump her first PB in six years and a new national record only weeks ago. She is a huge talent and will be jumping on Friday morning.

Peter Bol, who captured Australian imaginations with the race of his life in Tokyo and just missed an Olympic medal, was disappointed with his seventh place finish in Eugene, and it will be intriguing to see how he responds. Kenyan world champion Emmanuel Korir has not entered the Commonwealth Games 800m field and not has Canada’s Marco Arop, but world 1500m champ Jake Wightman, representing Scotland, is expected to compete in the 800. The heats will be on Wednesday night (AEST) and the final on Sunday. 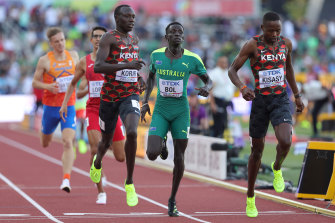 The 1500m will be one of the races of the meet with Australia’s dogged Stewart McSweyn chasing a medal against an elite field. McSweyn has fought back from a difficult start to the year. He was diagnosed with pericarditis – inflammation around the heart – after getting a vaccine booster too soon after having COVID, but performed strongly to finish ninth at the worlds.

The new world champion,Wightman, and the Kenyan pair of former world champion and Olympic silver medallist Timothy Cheruiyot and Abel Kipsang, who have run the best times in the world this year, are expected to be at the head of the field. The final is Saturday night, AEST time.