Ollie Hoare rounded the final bend three wide. He had three men ahead of him, two former world champions, ahead of him. The man in the lead, a Scotsman who was the reigning world champion and had the screaming local crowd behind him. Yet Hoare knew he would win.

Without a hint of hyperbole, Ollie Hoare won one of the greatest races in Australia’s running history and etched his name as a great of the sport. 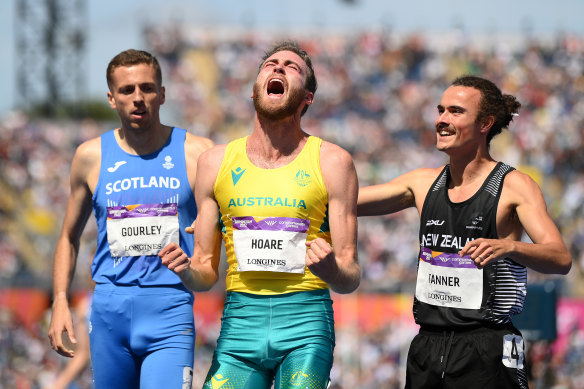 Ollie Hoare celebrates after his 1500m win in Birmigham.Credit:Getty

Hoare became the first Australian since Elliott to win a Commonwealth gold medal over the mile or its new incarnation the 1500m. And he did it in a manner befitting a race of its class, coming from behind to overtake two world champions.

“Holy shit! Commonwealth Games 1500m, it’s just so tough. You line up on that line and you hear the accolades of each and every athlete, just the respect that you have to have to get out there and even make the final is an absolute privilege,” Hoare said. 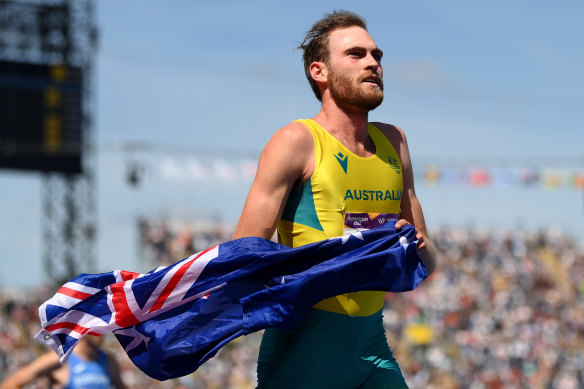 Ollie Hoare upstaged the best in the world in the most competitive race of the Commonwealth Games to win gold in the 1500m.Credit:Getty

Hoare was too strong for the reigning world champion Jake Wightman and overtook him and Timothy Cheruiyot. Cheruiyot staggered moments before the line, but Hoare already had him – he felt it at the top of the straight.

“Not many Australians have been able to achieve medals, let alone win it, so it’s an absolute privilege,” Hoare said.

When told he was the first Australian since Herb Elliott to do so, he was in disbelief at being in the company of his heroes.

“I was looking up to Herb Elliott when I was at school when I couldn’t run 5km without being out of breath,” he said.

“I’ve never met Herb Elliott. Heard all about him. My dad won’t shut up about him. You look up to them and you’d love to meet them. Steve Cram and Seb Coe you look around and they’re my heroes. They’re my Michael Jordan.

Ollie Hoare grew up in the Shire, south of Sydney, running for Sutherland athletics and being timed by his war veteran granddad Fred, who was a life member of the club. He was trained by his dad Greg.

“My grandad was a life member of Sutherland District Athletic Club, World War II veteran Sergeant Fred Hoare, so I dedicate the race to him. He was a big inspiration to me and my dad.

“He always had the same stopwatch, it was about 100 years old and he would trust the timer, he would only go off the stopwatch. My PBs were on his stopwatch.

“He was a great lover of the sport, a lover of Herb Elliott … he was the reason my Dad loves the sport, reason why I love the sport.

“After such a disappointing world championship and to win now and he just passed away at 96.

“It kind of hit me, I hadn’t been home and was unable to attend his funeral two days ago. He is up there having a glass of red wine laughing his arse off. He would be saying ‘I knew you could do it mate but I unfortunately wasn’t around to see it’.

“I’m sure my mum made my Dad deaf and my dad is probably calling everyone he knows. My brother is very excited because I think he made a pretty good gamble on Sportsbet so it is happy days for the family.”

Fred indeed would have been laughing his arse off, and roaring because had he still been there he would have stopped his 100-year-old stopwatch with Ollie crossing the line in 3:30:12, a two-second PB and a new games record. But the time didn’t matter as it was who he beat.

Hoare began comfortably and sat off the shoulders of Abel Kipsang and Cheruiyot who took the front two places and kept a hard fast pace. Hoare was happy with that, he’d trained for a fast race. 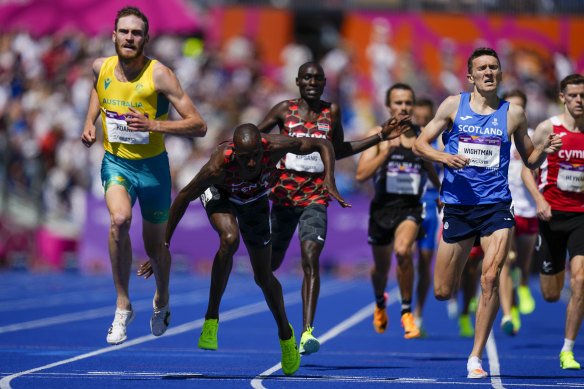 He looked to be running into trouble at the bell, blocked in on the inside lane. As Hoare got to 200 metres to go he had to check his run, drop half a metre and give himself space to get around. And then he kicked. What a kick.

He had to go wide but he was flying.

“It was a matter of pulling the kick at the right time. I went through on the inside with a lap to go and I saw (Scotsman) Jake (Wightman) next to me and started to panic because he’s the world champion.

“You can hear the Scottish roar in the stadium so I tried to hold my composure. Then with 100 metres to go I made sure I covered my spot on the bend to not let anyone else past me.

“Then when I got out to lane three it was all about holding form and just running like bloody hell and I was able to get it.

“When I made the move to lane three I could tell I had him (Cheruiyot) because he can’t gauge where anyone else is. You’re in a very vulnerable position, even if you’re of the calibre that he is, and I saw he was starting to lock up. I had more juice in the tank and I wanted it.”

Wightman couldn’t catch him and Cheruiyot couldn’t hold on. With five metres to go Hoare had him as Cheruiyot staged, wobbled and lost half a step. Hoare beat him by .09 of a second. Wightman was 0.41 second behind Hoare.

“I hope the race (is remembered). I had never made an Australian team until Tokyo.”

He said he was also pretty unknown while in the United Stats as a college runner on a scholarship.

“I hope I can bring that name and also show the kids back home that just because you are an Australian it doesn’t mean you can’t win Commonwealth Games 1500m.”